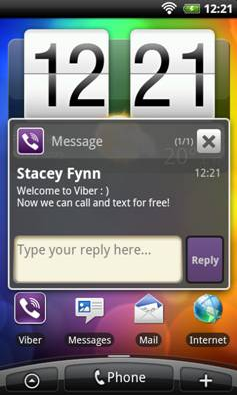 I’m a huge fan of Viber‘s iPhone app, which lets me call, and since recently, send messages to many of my contacts, free of charge. Needless to say, it’s imperative for Viber to go cross-platform as quickly as possible, because evidently not everyone has an iPhone.

We knew the startup was cooking up an Android application, but not when it would hit. Now we do: expect the Android app to become available – albeit in beta form – in the next few weeks.

I was able to test an early version of the Android app on my wife’s HTC Desire today, and it works flawlessly, although the Android app had some problems recognizing my Viber account. As soon as it did, though, it functioned as advertised, enabling me to make free calls over 3G and WiFi to my wife, and vice versa.

Viber will be gradually rolling out the app, unfortunately for those anxious to give it a whirl themselves, initially offering the release in the course of this week to 500 testers who register here, with additional invitations being sent in the next few weeks.

The startup expects the app to work on most Android handsets – it’s been tested on 20 popular devices from HTC, LG, Samsung and other manufacturers – but says it will have to rely on its users to identify eventual support problems (ah, the agony of fragmentation).

That said, Viber’s Android app actually comes with more features than its iPhone counterpart, namely the ability for users to have a full call screen appear when a Viber call is received, receive pop-up text message notifications that enable them to reply to messages without opening the app, and tighter integration with the phone, allowing users to see their regular call logs and messages inside Viber.

Next up: support for BlackBerry smartphones.