If you ever wanted a glimpse of what the Spiderman “With great power comes great responsibility” quote looks like actualized, take a second to digest the above photo of President Obama, Secretary of State Hillary Rodham Clinton, Secretary of Defense Robert Gates and various other PCs in the White House Situation room, captured as they “receive an update on the mission against Osama bin Laden.” Because I look exactly like Clinton when I receive “updates.”

Not surprisingly the unnervingly human photo has captured popular imagination over the past day and a half, becoming the point of origin of a multitude of Photoshop memes which range from Jersey Shore’s The Situation being placed in the Situation Room, to the Royal Wedding’s Grumpy Flower girl joining in on the fun, to everybody wearing Princess Beatrice’s absurd Royal Wedding hat, which was particularly inspired. Sure this is great guys, but I’m still waiting for the Tiger Woods cigar dude, Dramatic Squirrel and Disaster Girl insertions, granted I’m a dork.

People familiar with the matter are saying that this is the probably the fastest viewed ever photo on on Flickr. Flickr itself will only officially say that it’s the fastest one they’ve tracked and that a certain photo from the Royal Wedding has amassed over 1.3 million views since Saturday. 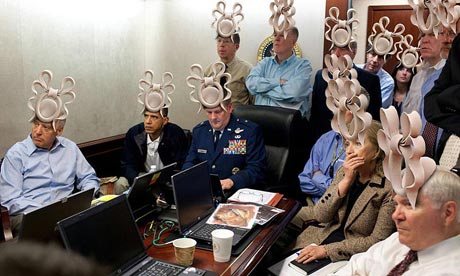 Image via The White House