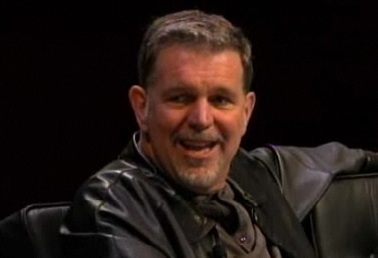 Netflix is blowing the doors off its business, with $3 billion in annualized revenue and a $12 billion market cap driven by the transition to streaming online video. In terms of hours watched, streaming surpassed DVDs for Netflix in the fourth quarter, but CEO Reed Hastings has been preparing for this moment for more than decade. The name Netflix itself always held the promise of movies delivered over the Internet. The problem, says Hastings in an interview today at the Wired business conference, was that back then they couldn’t stream movies over 56K modems.

But there was Moore’s Law and improvements in bandwidth which could be plotted, and that is exactly what Hastings did. “We took out our spreadsheets and we figured we’d get 14 megabits/sec to the home by 2012, which turns out is about what we will get.” So what does his spreadsheet tell him about the next ten years? “If you drag it out to 2021, we will all have a gigabit to the home.”

One advantage consumers will see with streaming over cable settop boxes or DVD players is that upgrades to the quality can happen much faster because they are not dependent on switching out boxes in everyone’s home. While streaming is just now catching up with high-definition streams, that progress should keep advancing and even leapfrog hardware solutions that really only change every ten years or so. Streaming Netflix movies to multiple high-def screens is only a matter of time.

As it turned out, however, the DVD business was not just a way to bide time while the network caught up. It laid the economic groundwork for the streaming business to become established because of the need to license content, which it doesn’t have to do with DVD rentals. “If we had tried to launch streaming in the beginning,” says Hastings, “I’m sure it wouldn’t have worked because we couldn’t have written big checks. Now we can write a $50 million or $100 million check which gets the content flowing. As we get more subscribers, we can write bigger checks.”

Asked whether Netflix threatened the cable companies, Hastings was careful to say that he doesn’t want to replace cable. That is why Netflix continus to focus on older movies rather than new releases, sports, or news. “We have consistently said that would not be profitable for us,” he says. “It would start an Armageddon battle, and we would not emerge alive from that battle. So we are concentrating on our niche.” And yet, Netflix is experimenting with licensing better programming and even original series. You can bet those experiments will continue.