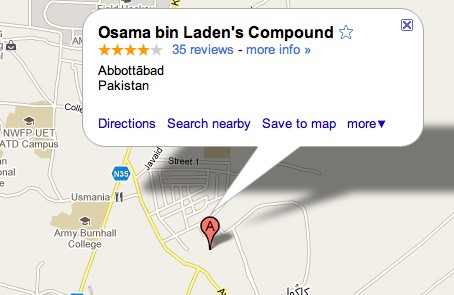 Google Maps users have been busy as the news of the raid on Osama bin Laden’s mansion was breaking. A pretty large compound listed on Google Maps in the city of Abbottābad, northern Pakistan has been picked out by users as being the genuine article – and with huge walls around it, it does indeed look quite suspect.

Whether or not it is the genuine article is unknown, but that is not stopping people leaving a slew of comments on the “venue’s” Google Maps page. Some choicer reviews include: “Great hideout would use again.”