If the Twitterverse is to be believed, President Obama is about to announce the death of terrorist and 9-11 mastermind Osama Bin Laden, in an impromptu announcement broadcast on Whitehouse.gov and TV this Sunday night at 10:45 EST.

The news actually hit Twitter before the President’s broadcast; CNN’s Steve Brusk first tweeted that the briefing was National Security-related at around 7:25pm PST.

Both Urbahn and Scott’s tweets were re-tweeted hundreds of times and Twitter itself experienced traffic spikes of 4,000 tweets per second (The NYT’s Brian Stelter has a more detailed account of how the news broke here).

What’s amazing is that the news is already out before the President has even spoken.

Update: The White House keeps pushing back the announcement, but CNN and the New York Times have just confirmed that Bin Laden was killed, with CNN adding the detail that the event took place in a mansion outside of Islamabad, Pakistan.

Update 2: The President has confirmed that Bin Laden was killed in an operation today in the city of Abbottabad, Pakistan (not Islamabad), after a firefight executed by a small team of US Human Ops troops. 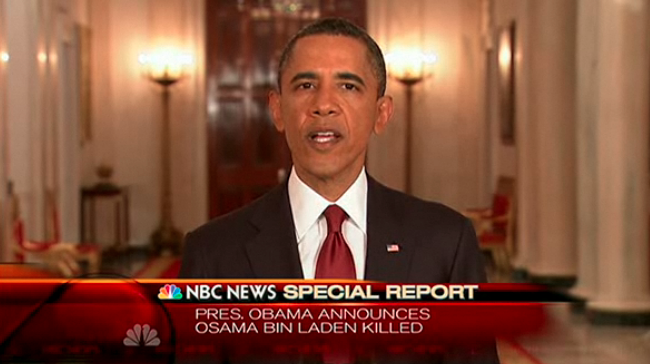