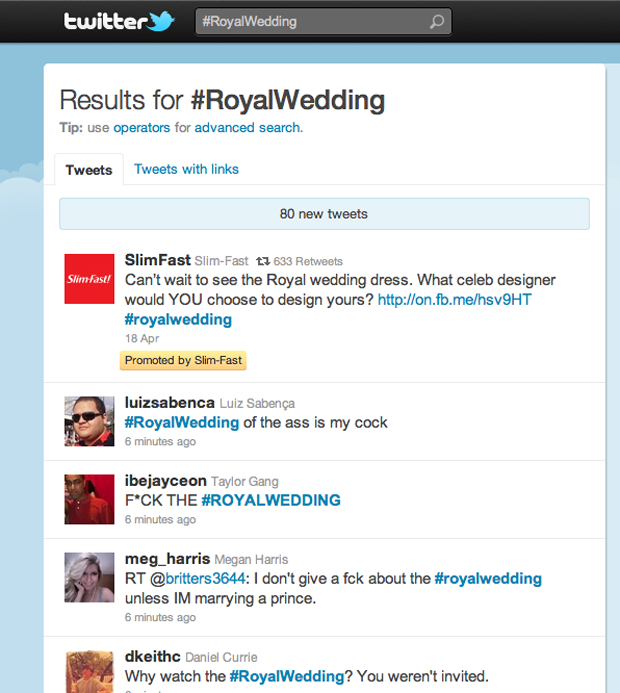 Twitter recently upped its rates on Twitter Promoted Trends from $60K-$70K to between $100K-$120K which means the demand for the unique form of advertising is certainly there. But what are brands getting in return? As we’ve seen before with Skittles, Charlie Sheen, and even the #Dickbar, attempting to float a brand message over user generated Twitter content isn’t always a success.

Case in point … For the past few days the chatter around the #RoyalWedding has been plentiful, but not necessarily all positive.

Diet shake Slim Fast bought the #RoyalWedding Promoted Trends slot yesterday, and at some point had its brand message (and its inexplicable link to its Facebook page) associated with sundry undesirable content.

While granted it is sort of funny, the relevancy of tweets like “#RoyalWedding of the ass is my c*ck” to Slim Fast’s admittedly inane message should be a serious issue for a company trying to monetize UGC. Companies who spend money on advertising tend to avoid the above sorts of associations, with good reason.

What makes this specific instance of ad relevancy failure worse is that the #RoyalWedding hashtag is currently being highlighted on Twitter’s revamped homepage along with #STS134 and #NFLDraft — As things that presumably add value to new Twitter users. Right now all three are riddled with hashtag spam.

Twitter, which just hit 200 million users, is currently averaging about 500K new accounts a day. While this growth isn’t too shabby, it’s hard to picture the middle aged, middle American curious about Twitter landing on the above results and wanting to stick around for very long.

#RoyalWedding side note: Twitter did not have a whole server dedicated to Will & Kate today. That was a joke.