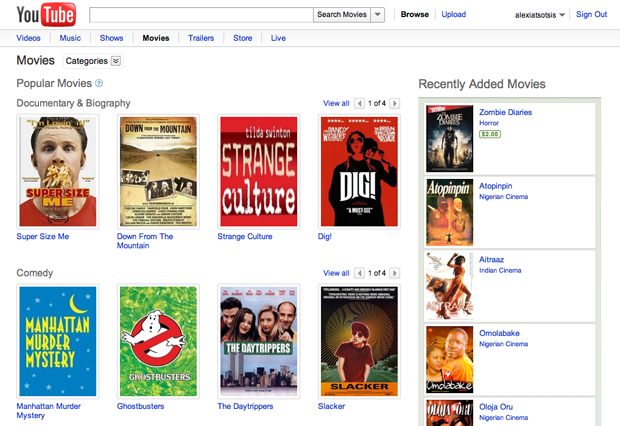 Sharon Waxman over at The Wrap has a story about a Video On Demand service about to be launched by YouTube that would be a “full-bore challenge to Apple’s iTunes service.” What the article fails to mention is that YouTube already has a Video On Demand service, YouTube Movies. Those interested can rent movies like Zombie Diaries, Ronald Reagan: An American Journey and The Dogfather right now on YouTube for around $2.99 each.

So while the streaming functionality already exists, it’s the deals with Hollywood studios like Warner Bros, Sony Pictures Entertainment, Universal, Lionsgate and Kino Lorber that are important to note. Mike reported that Google was planning a major expansion of its movie offerings back in December of 2010.

If Google is indeed serious about increasing the quality of YouTube content and offering a movie rental service than it has to compete with Apple’s iTunes, which currently has deals with Disney, Fox, Warner Bros., Universal, Paramount, Sony, MGM, Lionsgate and New Line Cinema, charging $2.99 per rental.

The partnerships would mean a new era of content cooperation for YouTube/Google and would possibly have repercussions for Google TV, which lost multiple major studio partnerships after its launch last year. Paramount and Fox (which also blocked Google TV) have declined to be a part of the streaming movie service according to Waxman’s report.

A YouTube spokesperson gave us the following statement, “We’ve steadily been adding more and more titles since launching movies for rent on YouTube over a year ago and now have thousands of titles available. Outside of that, we don’t comment on rumor, or speculation.”

While The Wrap holds that the initiative might launch this or next week, a better estimate might be during Google’s i/o conference on May 10th where Google is scheduled to debut a Google TV-themed Ice Cream OS.