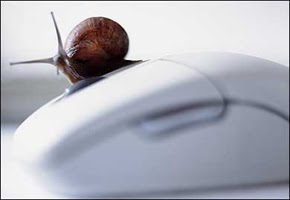 Sometimes being a TechCrunch editor can actually be vaguely useful. Honest. Because we cover European startups from London, I’ve ended up being invited to join the London Mayor’s Digital Advisory Board as well as attending roundtable sessions at Number 10 Downing Street. But it’s not just to chat over coffee and biscuits. Both the local London government and the national one is serious about trying to enliven and nurture the growing tech scene here. I wouldn’t say they ‘get it’ all of the time – but they are trying, and I’ve seen the enthusiasm. While there are sceptics about the whole ‘East London Tech City‘ project, I do know that there is a big appetite to nurture this industry. Nothing happens over night, but at least we’ve started.

However, one thing I have been banging the table about – increasingly angrily as the weeks and months have past – is the provision for broadband to startups in London.

Time and time again startups are telling me that while they can deal with hiring people, deal with finding lawyers and partners and VCs, what they can’t deal with is the achingly slow response times of broadband service providers. It cannot be underestimated how important super-fast broadband in the shape of fibre actually is to the development of the startup ecosystem. It sounds basic, but you can’t have a city without roads, and you damn well can’t have a Tech City without fibre into the buildings.

So at one Digital Advisory Board meeting at the GLA I recently pointed out that the first ISP to start offering Gigbabit broadband in Shoreditch (dubbed the ‘Silicon Roundabout’) would get great PR out of it. Hint, hint. A few ISPs present busily started scribiling.

Funnily enough, a few weeks later Virgin Media has announced it is to begin trialling fibre lines with download speeds of up to 1.5Gbit/sec, although the upload speed is limited to just 150Mb/sec. Unfortunately this is just a trial. And Virgin is really known most for residential, not business broadband. I hope we see more providers step up to the plate. The next ISP to offer this as a permanent, affordable solution in the area will get the equivalent of a hand job from TechCrunch.

But the latest in the litany of startups coming to me with broadband nightmares is Songkick.

This startup – which has nearly $7m in venture funding and a crack team of founders and engineers, and deals in place with the likes of Yahoo – has had huge problems with BT Openreach, the business broadband arm of the telco giant.

Put simply, they have tried to get fibre into their building in Hoxton Square – slap bang inside London’s Silicon Roundabout – but the process has become a bureaucratic nightmare.

Songkick started the process of getting dedicated fibre into their Hoxton Street office in February 2009 and needed to rely on BT for the last 100 yds or so into the building.

According to them, after months of delays, they were told in May 2009 (via their chosen supplier, Zen Internet) that BT had discovered that “one of the ducts which would be used to supply them with a dedicated fibre service, was damaged and a repair would cost BT £86,000 – half of which Songkick ( a startup) would have to cover.

In addition, it would take at least 6-8 months to arrange planning permission and carry out works, which involved digging up “300m of Old Street and 300m of City Road.”

Songkick made other arrangements that avoided all contact with BT and used a WiMax connection.

But they outgrew this and in early 2011 they re-commenced the effort to get a dedicated fibre connection.

They placed an order with their chosen supplier, Exponential-E, on Feb 4th. Again, BT needed to provide the final 100 yards into the building.

It’s now near the end of April and the project is still at the planning stage.

BT have taken two months to issue a permission-letter to the company’s landlord for some basic internal works required to get the cable up to the company’s floor – it’s a 4 storey building.

Every week they have been told that this “Wayleave” document would be issued “this week”, or “early next”, or “today/tomorrow”.

Today BT said that they didn’t actually post the document on Monday. Songkick claims “they explicitly assured us they did”. BT now says they emailed it. As of today the email is yet to be received by the office of Songkick’s landlord.

We have reached out to BT Openreach for comment on the above. They have not yet responded.

We’ll let you know when they have.

[Update: They sent the following statement: “”We appreciate that the time taken to commence this work has caused frustration; Openreach take any customer complaints of this nature extremely seriously and are investigating as a matter of urgency, with a view to resolving the issue as rapidly as possible.”]

But the whole broadband problem is an ongoing one, especially where BT is concerned.

As Chris Thorpe of Artfinder – another London startup which has had terrible problems – put it to me. “When’s the last time you heard a startup saying we’re in Hampstead?”

So, since there aren’t options in broadband products available to businesses then people go for Business Broadband. But it’s like what they have at home.

The Central London exchanges are very contended, it’s hard to get lines installed and they work badly.

Funnily enough, when it all goes bad BT tells you it’s not really what you want for your business and you really need the fibre to the building options or the Ethernet in the ‘First Mile’ products.

This is like BT saying (in a sort of gangster voice) “That’s a nice internet startup you have there… be a shame if you couldn’t get the bandwidth to make it happen now wouldn’t it… why don’t you try this expensive leased line instead…?”

Leased lines are really expensive and have a long, long lead time – 40-70 working days, an eternity to a small business. BT’s Infinity product would be a great option for many small startup businesses, but it’s unavailable in many parts of central London.

Until these problems are sorted out, ‘East London Tech City’ is going nowhere fast. You can’t have a Tech City without broadband. And it seems we can’t have superfast broadband in London without going through a process of self immolation when dealing with BT.

Here’s the full timeline of Songick’s battle with BT Open Reach, as provided by them: