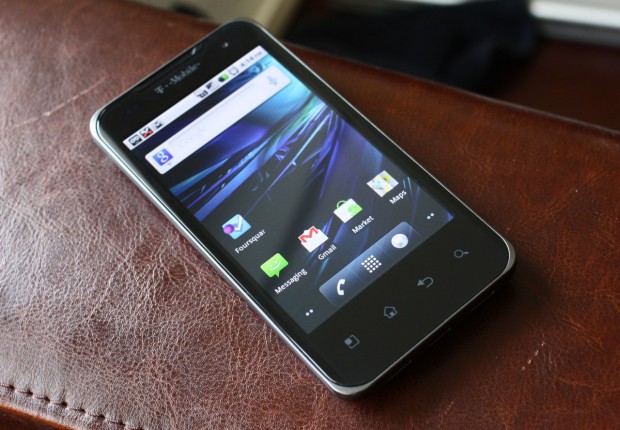 Short version: Perhaps the most powerful phone on the market, the G2x is certainly impressive technically, but physically it’s uninspiring, and a lack of compelling HD and gaming content catering to Android makes its greatest assets (large screen and powerful processor) underwhelming. And where’s my Gingerbread?

The G2x, third in the series of G-series phones from T-Mobile but the first made by LG, is probably the most powerful phone on the market right now. Its dual-core Tegra 2 processor is more powerful than many tablets out there, though of course as an Android 2.2 handset it has fewer opportunities to show this off.

But first, let’s talk about the physical aspects of the phone, since that’s the other major difference between this and, say, a Droid Incredible or something. 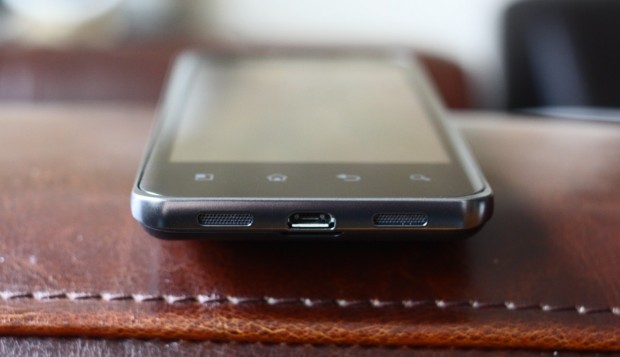 The G2x is really very anonymous. The front of the device is dominated by the 4″ screen, with the usual Android buttons at the bottom. The top has the HDMI port with cover flap, the on/off button, and the headphone port. Left side is empty, right side has volume. Bottom has stereo speakers and the charge port. On the back is the camera with LED flash, on a little plateau perhaps a millimeter up from the rest of the back. There’s a strip of metal embossed with Google’s logo, but the rest of the branding is very subtle. Its measurements are 4.9×2.5×0.4 inches, or 124x64x10mm.

The design of the phone is very much intended to be understated and clean, to the point where there is almost no personality visible anywhere on the phone — unlike the slightly polarizing Droid branding or the reassuring textured grey of the G2. That’s not to say there aren’t details to the design: the bezel curves ever so slightly downward at the sides, and upward at the top and bottom, and there is a bit of a lip at the four corners of the phone, on the underside, that doesn’t really serve a purpose but does help distinguish the back panel from the front. 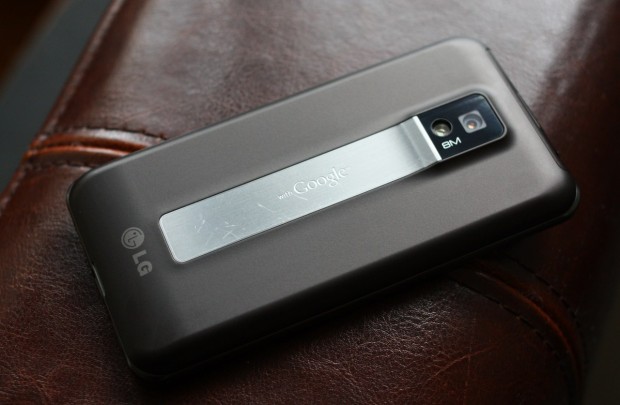 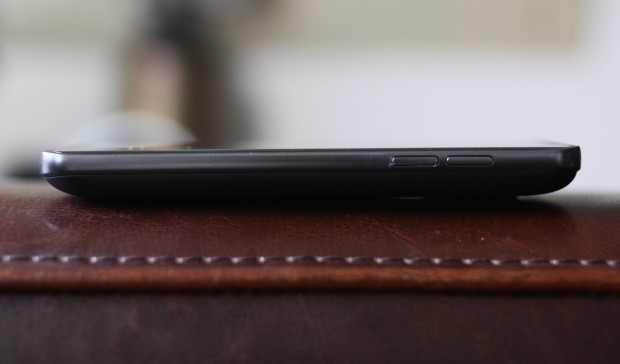 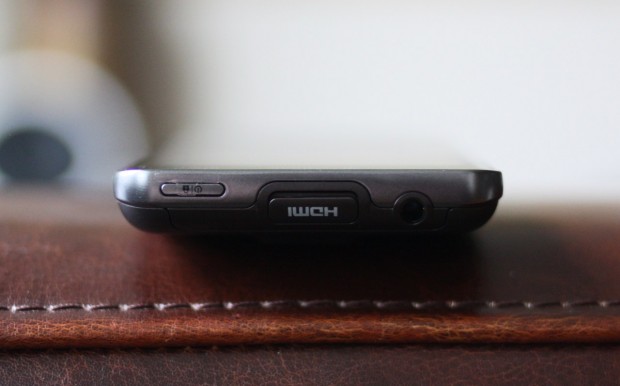 Just pretend you don’t see the sticker on the thing, there.

And although I say there’s no personality, it’s still tasteful and clean, which is more important to some.

The G2x has a large screen, but even so, the phone feels large to me. I put it next to an HTC Inspire with a 4.3″ screen, and the G2x was still longer and felt bigger (though the screen aspect ratio has something to do with that). The amount of bezel on the top and bottom is really quite ridiculous; there’s almost three-quarters of an inch of space on the bottom and half an inch on top. The buttons and front-facing camera are swimming in empty space, and it seems wasteful to me.

Removing and replacing the back panel is extremely easy. Underneath, the battery blocks access to the SIM but not the micro SD card, so you can easily swap if necessary. 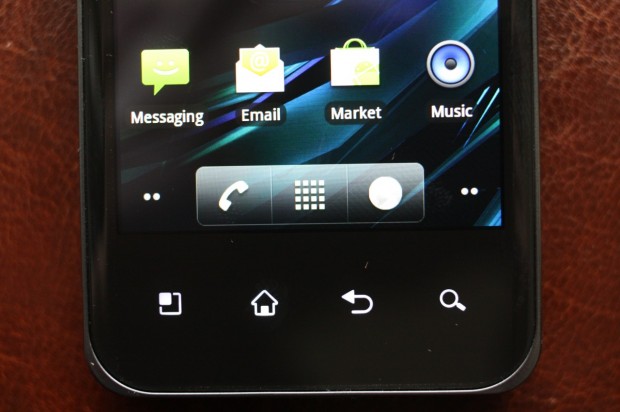 I found the screen to be nice but ultimately unimpressive. 800×480 at 4″ is plenty sharp, but it’s lacking in brightness. I regularly thought it was at medium brightness when in fact it was at full. For comparison, I’ve regularly thought the opposite of the Defy (thought it was on full when it was only on medium, that is), which really has my favorite screen on a non-iPhone handset right now. That said, if you’re not in too bright of lighting conditions, the screen is vibrant and contrasty.

The touchscreen was responsive and quick, though I felt that it was not always responsive to quick taps. I touched the screen at the same rate and with the same pressure as I’ve done with the last few phones I’ve reviewed and used, so I don’t think it’s me, though I haven’t seen the issue in other reviews. That said, most of the time (and especially with “normal” touches as opposed to the light taps used on “next” buttons and such) it tracked beautifully.

A quick note on the network speed. The G2x is, like the G2, kitted out for T-Mobile’s “4g” HSPA+ network. The G2 got around 9Mb/s down in my neighborhood, with around 3Mb/s up. The G2x reliably goes at half that rate – between 3 and 5 megabits down and around 1.5 up. Not exactly the lightning-fast advertised speeds, but they were fairly consistent and for all the usual uses it was quite fast – loading pages and games in the browser or downloading apps, that is to say.

I’m not a fan of mobile phone cameras at all, with their slow lenses and smeary artifacting, and the G2x’s is no different in most respects. The 8 megapixel sensor does not imply a better resolved image than a 5 megapixel sensor, like the one on a Defy I had around. I took the following two pictures within a minute of each other. There’s virtually no difference in terms of fine detail, and if anything the Defy better reflects the color; pictures taken with the G2x camera seemed to have a sort of bluish-green cast. The third picture is from a cheap Kodak point-and-shoot, for reference. 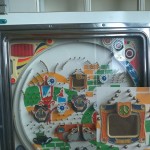 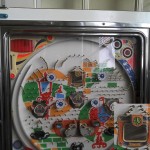 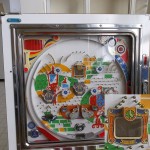 That said, it was much snappier to access, and browsing between pictures in the gallery is quick and easy. Unfortunately you can’t view the full-resolution picture in the built-in gallery app, pictures are just a preview.

1080p video gets more or less the same treatment. 1080p, as is often the case with small devices like this, really is just a number and has little to do with how good the video looks. In this case the video looks like any other cheap 1080p video camera. 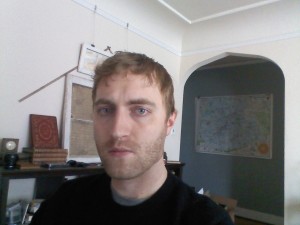 The front-facing camera is about what you’d expect quality-wise, but instead of taking 640×480 images (like most), it takes 1280×960 (sample photo to the right, there). I couldn’t test the video-chatting ability because I don’t know anyone who uses Qik Video Chat. Nobody does, and I doubt all your friends are going to sign up, and T-Mobile is rolling out a competing service anyway. And since the experience is very much service-limited, I didn’t want to pass judgment on an aspect of the phone over which LG had very little control. When more video chatting apps are out there to make a legit comparison, we’ll include more on this topic. 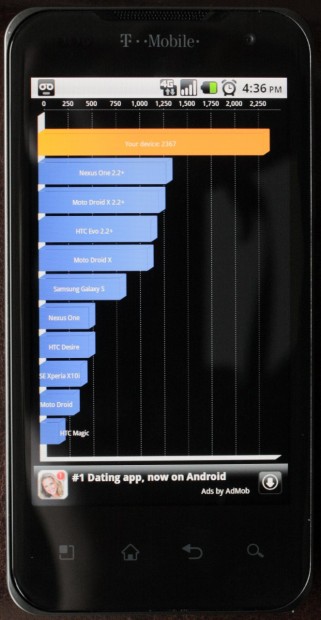 The main selling point of this phone has to be its processor. Tests performed on this device have borne out that it is quite a bit faster on benchmarks than any other phone, though the sad truth is that there’s not much to show it off with. It ships with a couple games, but very few games are made with this much power in mind, and big ones like NFS Shift, while they run extremely well, don’t really look that impressive (like, say, Infinity Blade, made with iPhone 4 in mind). There will be better ones in the future (Galaxy On Fire II looks fantastic), but right now the “Tegra Zone” app is full of May, June, and beyond release dates. I can’t fault LG for being ahead of the curve, but no one should buy this phone thinking they’re tapping into a secret Android treasure trove of high-powered gaming excitement.

The most important bit for many people is actually the 1080p support and HDMI out. And it’s everything they say it is. I didn’t have any videos on my hard drive in 1080p that the device could read (WMV, MOV, and MKV files, which make up a lot of 1080p content, don’t go), but MP4 and AVIs at 720p played smoothly and looked great. And of course with a screen resolution of 800×480, 720p is indistinguishable from 1080p.

If you want to put it on a big screen, HDMI out works as advertised. Greg notes that you may have to turn off “overscan” if you’re mirroring the display. There may also be frame rate restrictions, but I was unable to test for that. The 1080p sample files played well, but of course they would. Your mileage may vary depending on bitrate.

Day-to-day use, I should say, was very snappy and responsive. I felt less hesitation and stuttering in normal apps, and webpages (including Flash stuff) loaded and moved smoothly.

Battery life is surprisingly good. Normal use of 3G-4G networks with a little light video watching or gaming will probably net you at least 12-15 hours, and easily more if you’re conscientious. After half an hour of 720p content and a 40-minute phone call today (plus about five hours of idle time), by battery is at 43%. So yes, HD stuff will kill your battery, though there’s enough juice to watch a movie.

I can’t be sure this isn’t an Android problem, so I’ve separated it out here, but I haven’t experienced it with other phones so it’s worth mentioning. The G2x seems a little slow to wake, in that when you press the wake button, you often will see your homescreen for a fraction of a second before the lock screen appears. This seems strange and potentially a security risk, though I couldn’t get it to activate anything during that short time. It also would only update the clock and notifications bar after a noticeable (but still only a fraction of a second) interval. It’s just a little jarring to have the world’s most powerful phone, but know it’s displaying the time from an hour ago for some reason.

There’s also no notification LED. Combine this with the slow wake mentioned above and it seems like you’re constantly turning your phone on and off to check whether you have messages, only to see your home screen or an out-of-date clock for a quarter of a second. Again, a minor issue but one that would bother me if I’d shelled out top dollar for what’s supposed to be one of the world’s most advanced handsets.

Lastly, there is, as expected, a number of carrier garbage apps on the phone. I count about a dozen.

Update: Just two things I would like to add after a little more time with the device. Swype is more responsive and easy to use on the G2x than any other phone I’ve used, so if you’re a Swype lover, think on that. Also, I did get one of the units that randomly reboots. It didn’t do it during the period leading up to the review, but shortly after it started shutting off at random times, as others have reported, perhaps twice a day.

If you’re in the market for a big phone, you should certainly at least give the G2x a look. And if you’re interested in the future of Android as a gaming platform, this is probably the best device to test on or just have fun with. And if you’re a ROM hacker looking at trying to get 3.0 on a phone or just love to get cool unsigned apps on your handset, this could be a good choice, as it’s powerful enough to handle anything out there currently and do work (like operating a VM or something) on which other phones might choke. But for the casual user who hears it’s a powerful phone with a big screen, I’d have to recommend they look into the other powerful phones with big screens out there before throwing down on this one in particular.

More information on the G2x can be found at T-Mobile.