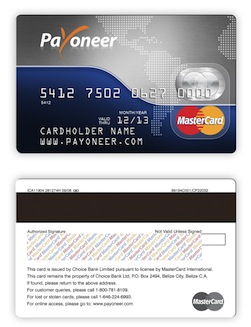 If you’re a professional affiliate, buying traffic, getting paid, then turning around and buying traffic right back up again is your modus operandi. The ability to turn around and re-buy traffic as quickly as possible is the part where revenue generation can take a big hit. The challenge for affiliates is getting liquid access to their earnings. Easier said than done though.

It’s this particular problem that Payoneer, whose Master Card debit card solution we’ve covered in the past, has made into its house specialty and why it’s become a popular choice for international affiliates.

Need proof? How about $500M in yearly payments going through its systems, and a year-over-year growth rate in the past four years of 100%? No question that Payoneer’s offering has jumped the shark.

Affiliates typically receive their payments by way of wire transfer or check, directly into their local bank accounts, in their own countries. When they buy traffic, however, they usually need to make an international payment.

This moving of money back and forth is costly (fees can be upwards of $30 for wire transfers), and also time consuming (wire transfers take several days to make it to their destination).

With Payoneer, all users are Master Card debit card cardholders. This means that once funds are deposited into their accounts, users can immediately make standard credit card payments, or withdraw cash from ATMs. For affiliates, the real upside is that they can use their cards to pay for traffic they buy **without** the back and forth local-to-international money transfers.

Also, using Payoneer doesn’t require users to have bank accounts, and the cards can be reloaded within hours of funds being deposited in user accounts. And now with the newly launch local bank transfer service, Payoneer can transfer funds in the local currency of the user, as opposed to the currency they were paid in (typically USD). Local currency transfers are both cheaper ($6.95-9.95) and faster than a standard wire transfer. For international users residing in countries where banking systems are still lagging decades behind those of Western countries these are big deals.

The local bank transfer service is going to be gradually released to different countries and partners, so it will take a while to become available all over the globe (although that is decidedly the goal).

Payoneer’s value proposition hasn’t gone unnoticed. The company already has over a thousand partners making payments to hundreds of thousands of users. And with the signing of Direct Track, ~100,000 additional affiliates will be exposed to Payoneer’s solution.

Payonner is backed by Carmel Ventures and Greylock Partners.