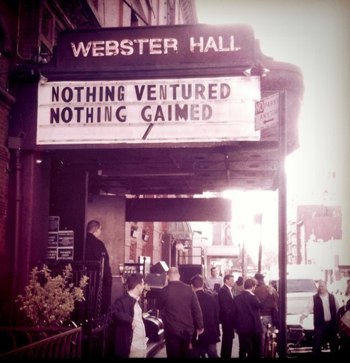 TechStars NYC killed it today with its first ever Demo Day in New York City. I’ve been to a lot of startup pitch events, and I felt that the caliber of the companies and pitches were better than most other incubator and startup events in New York (which makes me feel really good about our own Disrupt NYC event coming up in May). The room was packed with investors too, including Union Square’s Fred Wilson, Roger Ehrenberg of IA Ventures, Howard Lindzon, Mo Koyfman of Spark Capital, and John Borthwick and Andrew Weissman of betaworks. The energy and interest level was up a notch from what I’ve witnessed before.

Nestio is attempting to clean up real estate search because “moving sucks,” in the words of CEO Caren Maio. With either a browser bookmarklet, emailing links or cutting and pasting, someone doing a housing search can organize all of the listings they look at across multiple sites into Nestio. There they can compare them on an apples-to-apples basis by price, square footage, amenities, and so on. It’s all clean and in one consistent UI.

Nestio adds in a social element by allowing people to invite their friends and prospective roommates to see their search list via Facebook Connect. Their friends can then comment on the different options. Right now, Nestio only works in Manhattan, but it will expand soon, and mobile apps are also in development (which is kind of crucial when you are roaming about looking at apartments and homes).

The second demo was by ThinkNear. (“Demo” is a misnomer, no actual products were demoed today—mostly the startups used video and slides). The company was founded by two ex-Amazon employees with some serious technical chops. They are building a a fairly straightforward way for local merchants to deliver mobile ads to consumers based on their proximity to their stores.

Using existing ad networks and the ability to geo-target the ads, ThinkNear will give local merchants a dashboard that lets them set up offers based on when they need the most foot traffic. “We start by capturing busy and slow times for merchants,” says CEO and founder Eli Portnoy, “and also track redemption data to see what discounts work.” ThinkNear uses all of that data “to figure out what discounts to put in front of consumers.” And does not require the local merchants to continuously monitor the campaign after it is set up.

ThinkNear is platform-agnostic and takes advantage of cheap mobile ads on apps whose fill rates hover around 30 percent. It can deliver discount offers in the form of banner ads inside apps, push notifications, or even text messages, depending on the app. If they pull this off, this could become a substantial ad network. Here’s a video explaining the concept.