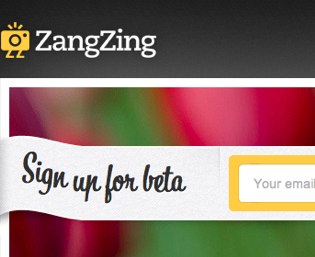 The digerati ponder Color and its tens of millions of dollars in financing. It will become the next Cuil, or it will turn Facebook into a buggy whip, or both, depending on who you talk too. Only time will tell. Meanwhile, the actual user experience is horrific (luckily the product seems happily disconnected to the company’s hype).

Meanwhile, I still want to make on the fly photo albums during events. I’ve wanted to do this for a long time, and there aren’t many options out there. Flickr has some limited group sharing but it’s too onerous for one time events, and works better for long term groups (butterfly lovers or whatever). MG managed to use Color for a weekend trip to Mexico that ended dramatically if not surprisingly with a bout of Montezuma’s revenge. Few others will bother until the app has gone through a few more versions.

Anyway, new startup ZangZing will fit this need nicely. It’s a beautiful photo repository that focuses on sharing and presentation. If you’re at an event, say a wedding, and you want to start a group album, just upload a picture from the wedding via email and then invite your friends. They can reply with their own photos, which are added to the album. And they can add new friends by email invite as well, unless someone’s changed the privacy setting to make an album private or even password protected. There’s no need for anyone to create a new account, simply by responding to the email with photos they’ve begun the process, and can finish the rest later, if they like. It’s one of the ways Posterous grew so fast, by making account creation so simple that you’re done before you even know you’ve begun.

ZangZing hasn’t launched yet, but it will soon and I’ve been testing the service. Pictures are beautifully displayed, with very little distracting text and certainly no advertisements. Scrolling through photos is a very Flash-like experience but, wonderfully, the site is entirely Flash-free. The wonders of HTML. And they’ve integrated a very nice desktop downloader into the browser experience. No more broken Flash uploaders to deal with, either.

And ZangZing says they want to be your long term repository for photos. It will be a freemium service where you will eventually pay a fee for increased storage. But if you discontinue paying they won’t hold your photos hostage, like Flickr so callously does. “We’ll always give users access to their photos,” says cofounder Joseph Ansanelli (a promise we’ll hold him to). he says for long term users they may just send them a DVD on request with their photos to save the days and days of downloading required for huge numbers of photos. I imagine they’d charge a few dollars for that, but it would be worth it. Flickr should do the same.

Anyway, this is just a teaser for now, the company doesn’t want any screenshots out there yet. The team, by the way, has some serious chops. They’ve self-funded so far with $1.5 million.

Serious photographers will probably always have their favorite sites to show off their photos. But the social/sharing/group photo crowd space is still wide open, other than Facebook. I think there’s room for a service like ZangZing to capture our imagination, particularly if they integrate with Facebook and eliminate the need for another social graph.