For the past four years, TubeMogul has built itself up as one of the premier tools for online video producers to syndicate and analyze their online videos across the Web. Last year, it launched a video ad network called PlayTime that took advantage of all the video viewership data it was collecting, and on the strength of that product it raised $10 million last October. The company has been busy putting that money to work building on top of PlayTime to create a soup-to-nuts video ad platform around which it is relaunching the entire company today.

TubeMogul is now completely focussed on brand advertisers and their digital ad agencies. CEO Brett Wilson says it is “one place they can buy, place, track and optimize their video ads.” He calls it a demand-side platform (DSP) for video ads, much like Google-owned Invite Media is a DSP for ad agencies. It’s not just an ad network, it’s a whole lot more, folding in analytics and the ability to selectively place video ads on specific sites, or even to tie into existing advertising relationships.

You can think of it as a dashboard for video advertisers that lets them upload ads, select sites where they want them to run, bid on inventory, and get consistent analytics on how those ads perform. Plenty of DSPs exist for online display ads, but none yet for only video ads. “If you are an advertiser you will be able to log in, self serve and launch a pretty sophisticated video campaign in a matter of minutes,” promises Wilson.

TubeMogul is tapping into 60,000 auctions per second for video ad spots across 90 percent of the top 1,000 comScore sites. It has direct access to their ad servers either directly or through partnerships with video ad server companies (LiveRail, Adap.tv, and SpotXchange), ad exchanges (Right Media, adBrite), and other ad optimizers (Admeld, Rubicon).

This opens up a lot of remnant video ad inventory. Video ads placed through TubeMogul’s DSP during the beta period were running on average between $8 and $15 CPMs for preroll video ads, and between $2 and $7 CPMs for video ads running in regular display ad spots on regular web pages. If advertisers already have relationships with publishers, they also can plug in their existing economics.

The ads can be geotargeted, retargeted, or targeted by data imported from other ad-tech companies. And TubeMogul will support mobile and social video ads, such as ones people watch in exchange for virtual currency in games. For self-serve advertisers running video ad campaigns through TubeMogul, it will take 10 percent to 15 percent of the advertising budget. For larger ad agencies and trading desks, better deals are negotiable. 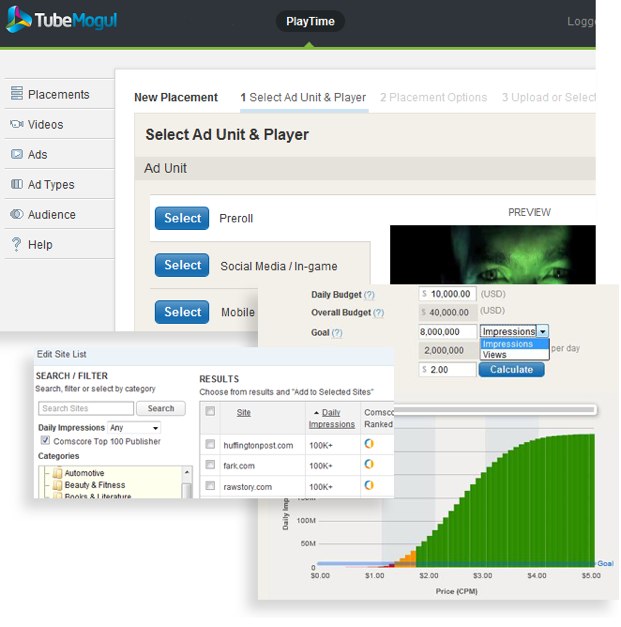