In Twitter’s attempt to monetize, there’s no question that a key factor is brand support. That is, brands utilizing the network effectively to interact with customers and spread messages. Twitter knows it’s a potential goldmine. But it’s also not where it needs to be yet. And that’s exactly why Twitter loves SocialFlow.

And it’s a model that already working. Revenues have been pouring in for about a year now. That’s exactly why investors are pouring a $7 million Series A into the company today. And it’s also why Twitter has signed a long-term agreement with them as well.

To be clear, SocialFlow had access to Twitter’s data before, but only on a trial, month-to-month basis. But Twitter loved what the company was doing with the data enough that both sides decided to formalize the agreement today. “It’s like a promise ring,” SocialFlow co-founder Frank Speiser quips. 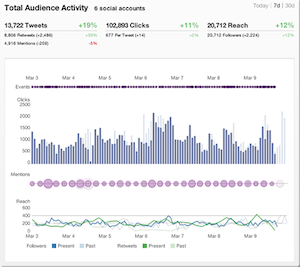 Neither side would comments on the terms of the relationship — but it’s clearly beneficial to both.

“This is exactly what we want to see out of the ecosystem,” Twitter Platform lead Ryan Sarver adds. “These guys are building a real business,” he continues, clearly references the most recent (and controversial) ToS changes.

Both this SocialFlow deal and the recent Mediasift partnership point to the future of the Twitter ecosystem. It’s no longer about building new clients, it’s about utilizing the information that’s already there and augmenting it. The Mediasift deal is about the re-syndication of content, the SocialFlow one is about the production of great content, Sarver notes.

The Series A round was led by Softbank, with Softbank NY, RRE Ventures, Betaworks, High Line Venture Partners, AOL Ventures, SV Angel and some individual angels investing. This follows a seed round just about a year ago from Betaworks and Dan Porter (the CEO of OMGPOP).

Speiser notes that the new money gives them enough room to do the things that they want to do. That includes a lot of research on the data they’re both receiving and creating. “We realize this is something that people will pay for and they really need,” he says.

The NYC-based SocialFlow now has 17 employees and came out of Betaworks.