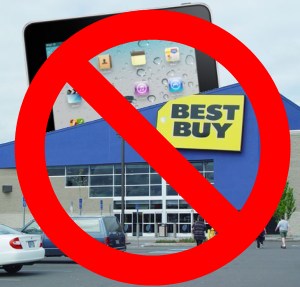 A reader who works at Best Buy just told us that there’s been a bit of a misunderstanding between the electronics retailer and Apple. Apparently, Best Buy was holding off on selling the iPad 2s it had in stock, telling customers there weren’t any when in fact they had just reached their quota of sales for the day.

Yeah, doesn’t seem like a smart strategy to me either, but this is Best Buy we’re talking about. Apple didn’t like it either, and has declined to sell any more iPads at the store for the time being.

The tipster continues, saying that no less than Tim Cook is involved in this little snafu, and will be helping with the negotiations. He says the Apple Rep at his branch of Best Buy confirmed the story, though until we get proof in the form of a lack of iPads in-store, we’ll consider it a rumor. A very likely rumor, but still.

I just don’t get why you would mess with Apple. Their retail roll-outs are very carefully planned for maximum splash effect, and selling them by the million on day one is a big part of that. Did Best Buy really think it was wise to tell customers to come back later?

UPDATE – The original tipster just got this from Tim Cook:

My understanding is most of their stores sold all of their initial supply on the first night of the launch and the balance were out by the following day. I am not aware of any units being held.