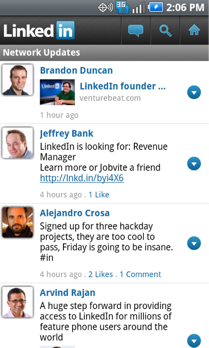 As we wrote in December, LinkedIn finally gave users an Android app after launching apps for iOS and BlackBerry platforms. Today, LinkedIn’s Android app has exited beta and arrived on the Android Market.

The free application features six modules, including the ability to view updates from your professional network, including updates from newly established connections, changes to people’s profiles, and articles and information being shared by your contacts. The sharing and social features of the app are new, and you can now share news updates to Twitter and comment on shared items. The app also includes unified search across both direct connections and the entire LinkedIn network.

The app allows users to access the profiles of your connections, and you can send connections a message directly from the application. Messaging has been fully integrated in the app in the new version, and you can now send and receive messages from the app. Additionally, you can accept outstanding network invitations. 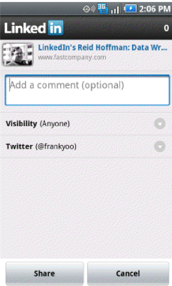 Another new feature is the addition of the “People You May Know” feature, which provides suggestions for new connections. In addition, this is the first launch of the app on Google’s marketplace; previously the app was only available via LinkedIn’a Android group.

While I haven’t tested the app out yet, the potential for LinkedIn to create a sleek, feature-rich app is great after the network snagged Android senior software engineer Cedric Beust from Google last year.