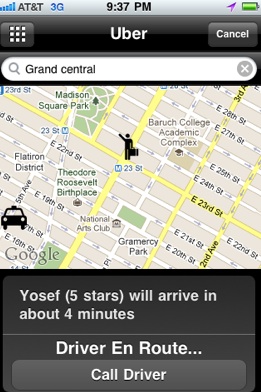 So do you remember about a month ago when I wrote that Uber (the order-a-car-from-your-iPhone sensation in taxi-challenged San Francisco) is coming to New York City? (Sure you do. It was a great story.) Well, that day is here. The company soft-launched its service in New York City today. If you download the Uber app, it now works in Manhattan and the outer boroughs.

I know because I just ordered an Uber car on my iPhone in midtown Manhattan in the rain, and a big black SUV picked me up in about five minutes. Same great service as in San Francisco. I watched as it located a driver and saw the car move towards me on a street map (see screenshot). My driver, Yosef, was friendly and courteous. He told me he had to pass a rigorous test on his knowledge of New York city streets to become part of the Uber fleet. Everything was charged to my Uber account, and I saw the amount pop up on my iPhone at the end of the ride. I rated Yosef as a driver, and he rated me, and my ride was over.

The total amount from 23rd street to Grand Central Terminal, 20 blocks away, was $15—about twice as much as a regular cab ride. (Uber gave me a $10 credit, though, perhaps to ease New Yorkers into the service). The truth is that even though it was raining, I could have grabbed a cab or hopped on the subway. I saw a few free cabs. New York City doesn’t have the same scarcity issue as San Francisco when it comes to cabs or car service. But the convenience totally outweighs the expense in certain situations—when you are late for an important meeting or want to impress a date or really can’t find a cab. I have yet to test the service in rush hour when it really counts, but I think Uber will find plenty of riders willing to pay twice as much for the feeling of a private driver.

For those TechCrunch readers in New York City, don’t all order an Uber car at once. There are only a few dozen drivers currently on the service.