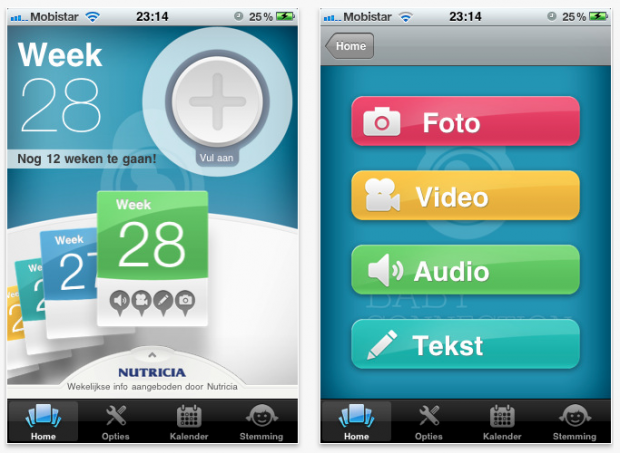 Making babies is hard work. First you’ve got to find someone to make the baby with — which, depending on the status of your face and how often you do Borat impressions, might be the hardest part. Then you’ve got to spend the next 9 months eating right, avoiding illness, picking names, and remembering to not go skydiving. I’ve yet to have a kid (mainly because I’m still pretty young and I saw enough after-school specials as a lad to scare me away until I’m at least 70), but it seems pretty much impossible.

Fortunately, we live in the future. We’ve got friggin’ supercomputers in our pockets. Surely, these things can make the baby-making process easier? So far, most of the apps out there have been targeted at just half of the baby-building duo; they’re either built for Mom, or they’re built for Dad. A new release this week, Baby Connection, aims to bring both parents into the picture with a rather clever idea: a two-part app.

To clarify, “two-part app” means its actually built to run on two separate iOS devices — one for Dad, one for Mom, with each half of the app focusing on the needs and contributions of its designated baby architect.

For example: while Mom’s app is telling her what’s going on inside her body, Dad’s app might be dropping hints as to what sorts of things Mom might need help with at this point. Is Mom feeling a bit grumpy today? She can update her mood status, and Dad’s phone will be buzzed immediately with a warning to tread lightly. Both halves of the parental partnership can add photos, movies, sounds, and notes to the baby’s timeline — and as a bit of a cool (if silly) trick: if you put both phones next to each other, you can view the timeline spread out across the resulting double-sized display.

While the application is free [iTunes Link], there’s a catch: it’s currently only available in Dutch and French. For the sake of Baby-masons everywhere, we’re hoping that an English translation is on the way — but in the mean time, check out the video demo below: