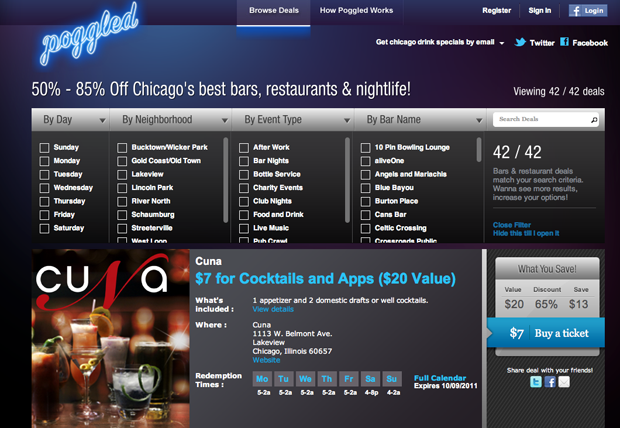 Poggled, a Chicago-based daily deals site that focuses only on and club discounts, has just raised $5.6 million at a $33 million pre-money valuation according to an SEC form filed today. Well what’s interesting about this? As Fortune’s Dan Primack points out that Groupon investors and co-founders Eric Lefkofsky and Brad Keywell and New Enterprise Associates principal Tom Grossi are listed on the SEC form. Grossi will be joining the board.

Lefkofsky and Keywell, who now run investment firm Lightbank, were involved in Groupon’s seed round and NEA backed the service in a $4.8 million Series A back when it was called The Point. That $4.8 million seems like pocket change when you consider that Groupon just raised $950 million and is said to be valued at $25 billion.

As for the service itself, Poggled is an interesting take on the vertical daily deals model, where users buy a bar or club-related deal and are given a special code they can then redeem at the service. The iPhone app allows users to sort deals like “$75 for Bottle Service” by Nearby and Happening Now or browse by Event Type, Day Of The Week, or Neighbor hood.  Users can also post deals to their friends through Facebook and Twitter.

Right now Poggled only exists in the Chicago market, but with $5.6 million in the bank I wouldn’t be surprised if it branched out into nightlife-focused urban areas like New York and Los Angeles. I’ve emailed Poggled for more info around its funding and future plans and will update this post when they get back to me.

Poggled founder Joe Matthews tells me that Lightbank invested in the 500K Poggled Series and that NEA lead the entire Series B. He also said that it will be expanding into five markets and will have more announcements soon.