A couple weeks ago, we wrote a post wishing Twitter a happy fifth birthday, but also noting that there was still much work to be done. In particular, search and archives range from weak to non-existent. Today, Twitter has taken a few small steps to alleviate at least one of those issues.

In a post on their blog, Twitter notes that an update to their search algorithms will now suggest key accounts to follow for any topic you search for. For example, if you search for racing, you’ll get a bunch of NASCAR and other folks suggested to you. Previously, these searches were only looking for a term like “racing” in an account’s name or username. So yes, this is much smarter, and better.

The other key change is buried at the bottom of Twitter’s post:

One more thing! Now, when you search on Twitter.com, you’ll see a tip from Twitter. This tip points you to a set of search operators and our advanced search page, which help you more quickly find what you’re looking for.

Yes, Twitter has finally ported over Advanced Search to Twitter (or “New Twitter” if you can still call it that). Previously, these advanced options like phrases, hashtags, people, places, sentiments, and others only resided on the Twitter Search standalone site. As we noted in our post a couple weeks back, some of these features were useful, but no one seemed to use them because it was nearly impossible to find them.

Now, Twitter is highlighting advanced search under the main search box after every search you do. And the entire thing resides on twitter.com instead of a separate sub-domain.

To be clear, even with Advanced Search, Twitter is far from where it needs to be in search — results still only go back five days. But this is a good first step. And the much improved alignment between search topics and users is also a nice change. 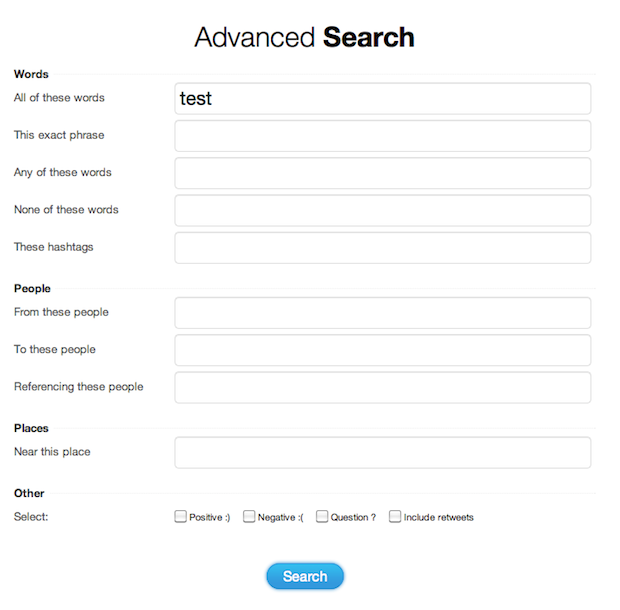