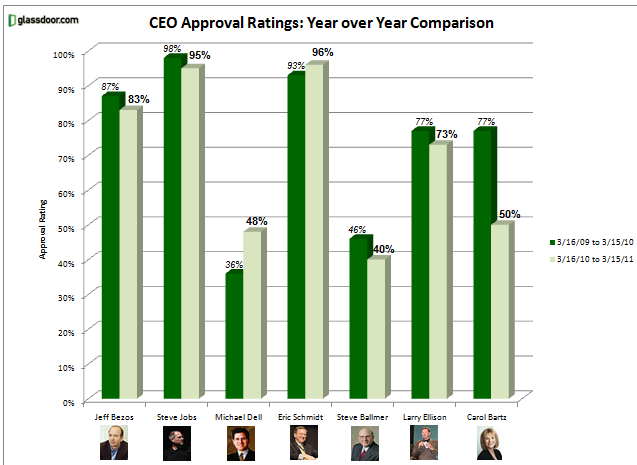 A survey taken over the last year by Glassdoor, a jobs and career community that allows users to anonymously share an inside look at jobs and companies, confirms that Eric Schmidt looks better when he’s on his way out. As the Google big whig prepares to step down from a decade of service as chief exec, his employee approval rating is at an all time high.

On the flip side of the popularity coin, Yahoo’s Carol Bartz is seeing her honeymoon period come to a close. In what is likely unsurprising news, among tech CEOs, Bartz saw the biggest decline in her approval rating in the past year, compared to the 12 months prior. Between March 2009 and March 2010, she held a 77 percent approval rating among her employees, whereas compared to the following year, her approval rating dropped to 50 percent. Granted, this is still 16 percent higher than that of her predecessor, Jerry Yang. Yang had a 2008 George Bush-like approval rating of 34 percent when he stepped down as CEO.

Microsoft’s Steve Ballmer saw the second biggest decline among the 12 CEOs evaluated. During March 2009 and March 2010, he held an average 46 percent approval rating, before dropping to 40 percent. Maybe IE9 will be enough to right a foundering ship?

Lastly, always worth noting is that Apple Man Steve Jobs remains as popular as ever, though his approval rating did drop from 98 percent to 95 percent. I’m sure when the iPhone 5 comes out, he’ll be right back on top.