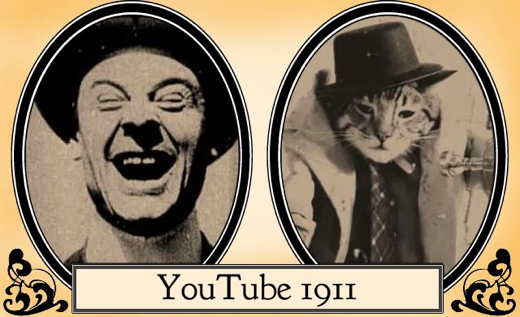 Head to YouTube after 4AM local time and you’ll notice that it looks a little old fashioned — and not in a 1999 blinking construction sign sort of way.

YouTube is reverting back to what it would have looked like had it been around in 1911, complete with grainy, sepia video footage, no audio tracks (save for piano accompaniment), and title cards in place of the site’s normal comments. Yes, it’s time for April Fools, and the world’s largest video portal is ringing it in once with some video player trickery — a tradition it started in 2008 after RickRolling all of its users.

YouTube has accompanied the gag with a blog post from President Taft, and it’s also put together some 1911-ified memes, featuring the ancestors of Annoying Orange and a certain musically-inclined feline. Even some of the ads are old fashioned.

Earlier today YouTube invited me down to their headquarters in San Bruno to talk to some of the team members who put this year’s trick together so that we could get some of the backstory.

YouTube says that, as with last year’s gag, the 1911 idea was submitted to a system called Moderator and then voted upon by other YouTubers. Once the idea was chosen, it took a whopping 14 employees to put it together (alright, to be fair, YouTube says the large team size can be attributed to the fact that a ton of people just wanted to participate).

The video effects, which include a grain filter and sepia coloring, are being done client-side using the same technology as YouTube uses for its 3D video player (interesting sidenote: last year’s ASCII video trick relied on an older version of the 3D video player — this one uses the new one).

The team ran into few interesting hurdles during the project. Initially, they wanted to have all of the 1911-ified videos play at double speed by adjusting the timestamp in video frame headers. Unfortunately this didn’t make the final cut because the effect was too taxing on CPUs (Macs, in particular, had difficulty with it because of Flash’s poor performance on OS X).

The team also wanted to change the thumbnails presented alongside each video to sepia, but this also proved challenging because there isn’t an easy way to do it crossplatform with CSS3. However, it does work for one browser: Internet Explorer 6, 7, 8, and 9 all have a special CSS property that allow YouTube to introduce this effect on thumbnails. As one YouTube team member put it, this is one of the first times a YouTube feature has actually worked better in IE.

There’s also some neat technology related to the meme videos. YouTube is experimenting with a new system that can identify “interesting frames” for its thumbnails — these typically consist of frames without any blur, and may contain faces or other interesting content. The technology is still a work in progress, but YouTube used it to generate the thumbnails for each meme video (it didn’t work well for one of them — the team hand selected the thumb for the buggy video).

Oh, and the YouTube team dropped one other hint: if you look at the 1911 videos, you’ll notice that they include the parameter &vintage=1911. Turns out there are a few other years that also work, so try experimenting.