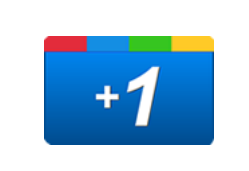 Back in early December of last year, we first reported that Google was toying around with the name “+1” for an upcoming social product. At the time, we were told it was sort of like Google’s version of the “like” or “retweet” button. Today it officially launches as a way to share Google Search results that you like with your friends and the broader web in general. Oh, and also a way to inject social into Google Ads.

To be clear, the version of +1 which is beginning to roll out today is not the toolbar version that we first got a glimpse of in December, that’s apparently a different version that was being tested. This version of +1 actually launching is a small button that will reside next to each and every Google Search result. If you like the result, you click the +1 button and it gets shared with your social circle — and the public (more on that in a bit).

The button also works on the ads that appear in Google Search. If you like those and think they can be useful to friends, you can also hit the button there to highlight them. That may sound like something no one would ever do, but the implementation is actually pretty smart. You see, since the pages that are linked to in Google ads also appear in Google’s regular index, if a page has ever been +1’d as a regular result, it will also show up as +1’d in the ad.

But let’s take a step back for a second. Google +1 is an extension of what Google has been doing for a while with Social Search, Google’s Matt Cutts tells us. In their most recent update to that feature, results were surfaced and highlighted when someone in your social circle shared something on a social network like Twitter or Buzz. “People really like this aspect of social search,” Cutts says.

At the same time, the current social mechanisms require some work to be useful — you have to explicitly share a link somewhere. You might not want to do that with every link you like. And that’s where the +1 button comes in, it’s a simple way to indicate you like a page and think it might be useful to others. Again, basically a “like” button.

Cutts wants to be very clear that this +1 data is public. While a big aspect of +1 is sharing results with your social graph (which is still sort of confusing given that Google isn’t an actual social network, so it’s Gmail chat contacts, Reader and Buzz friends, etc) , it is also about using that data in aggregate to highlight better results for everyone. For example, on a result that has been +1’d, you’ll see if any of your friends have +1’d it (in a similar way to the current Social Search look with people’s tiny profile icons under the result itself). But you’ll also see that X number of other people that aren’t in your social circle +1’d it as well. 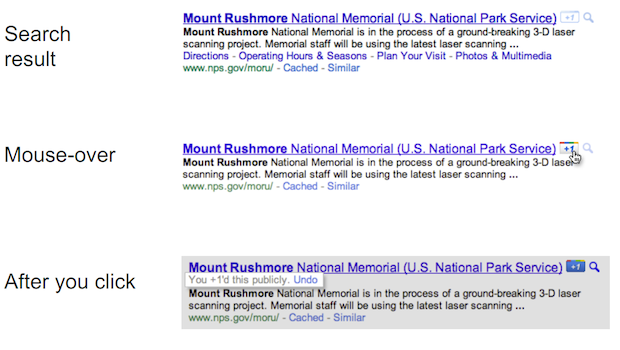 This also ties directly into Google’s push to make all Google Profiles public. If you’ve upgraded to the new Google Profile, you will have a new +1 tab that will keep track of all the results you’ve clicked the button for. From here you can easily remove any result as well if you no longer want to publicly indicate that you like it. And when you’re adding +1 to search and your profile (it will be opt-in at first), you’ll notice that there’s a check box to opt-out of using your +1 information to “personalize content and ads across the web.”

The last bit is key there. Ads.

Again, you’ll be able to +1 any Google ad you see in results just as if it were a regular result. This is similar to the concept Digg has been using with Digg Ads (ads that you can digg), and sort of like the way you can retweet any Twitter Promoted tweet. Of course, it’s most like the way that you can “like” any ad on Facebook as well.

At the end of the day, that’s what this really all comes down to. Whether they’ll admit it or not, Google is at war with Facebook for control of the web. Facebook is coming at it from a social perspective, Google from a data perspective. But the two sides have been inching closer to one another. Facebook isn’t fully doing search — yet. But their social ad play is also a huge threat to Google. Probably even a bigger threat, since that’s the way Google makes the vast majority of their money. And +1 is a big attempt to keep pace with Facebook in that regard.

The key that Google isn’t really touting yet is that +1 data can be used to make ads social not just on Google Search result pages, but also across the whole web. If you have a site that runs AdSense ads, it may now feature +1 data in addition to the ad. And these newly social ads require no changes from advertisers. The bidding model doesn’t change at all and as a bonus +1 data will now be included in reports, Google’s Christian Oestlien says.

Guess who else would like to do the same thing with ads across the web given the social data that they have? Yep — Facebook.

At the same time, Google has had many failures in the social space. And they realized that with +1, they couldn’t afford to have some big hyped-up launch once again. So they’re purposely taking it slow. There will be no +1 buttons for publishers at launch that will be blanketed across the web (but you better believe they’re coming). There will be no toolbar that spreads across other Google properties (that may be coming). There will be no mobile app or aspect (that is likely coming as well). The feature itself will roll out slowly and will at first be an opt-in one found in Google’s search experiments area.

But make no mistake, this is a massive Google project. And eventually it will hit all users — and not just those logged into their Google accounts. Down the line, Google can envision this +1 data influencing search results across the board, Cutts says. That’s what we call “downplaying” — assuming people use it, the social data is very likely to be the key ingredient to the future of Google Search. 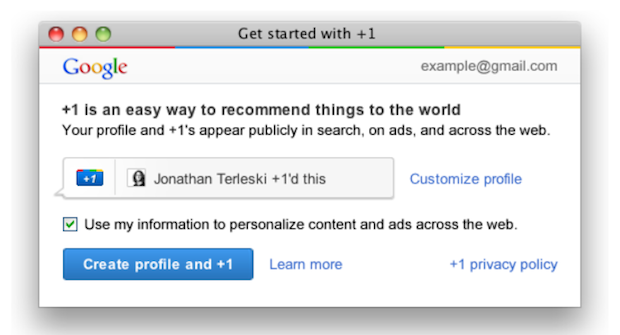 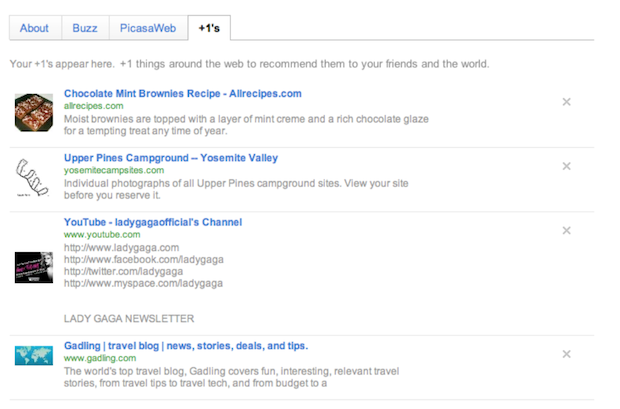