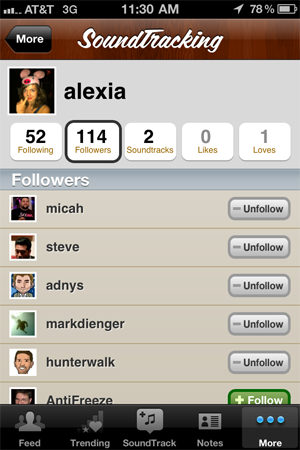 If you haven’t noticed by the amount of follower notifications you’re suddenly receiving, music snippet sharing app SoundTracking has a had an impressive 14 full days since its SXSW launch, clocking in 100K downloads from the Apple App Store on March 26th.

SoundTracking, for the un-initiated, allows users to share music with the with added context of photos, locations, and comments. SoundTrackers can use GraceNote, their iPod or manual search to identify songs.

While we’ve seen this level of growth with photo-sharing app Instagram (which hit similar numbers in a week), I’m going to drag out the Foursquare growth reference point (it took Foursquare seven months to get to 60K users) again to emphasize how impressive this is, especially for a music sharing service.

Co-founders Steve Jang and Matt Paul, who was the first engineer at StumbleUpon, hope to create a new social graph centered around music, as opposed to just a music scrobbler. “It’s not so much about sharing the music, more like sharing the moments around the music,” Jang tells me.

SoundTracking’s social elements are the key to its success here. In contrast to pure song ID apps like Shazam and Soundhound, Soundtracking’s Twitter and Facebook sharing features aren’t bolted on, but a core part of the experience.

While Jang is currently working on an Android app and integrating SoundTracking with other services like YouTube, he also promises that more socially-focused Schematic Labs products are to come.

In the meantime, you can watch Jang and MG Siegler talk at SXSW about how the app allows users to “share the soundtrack to their lives,” below: