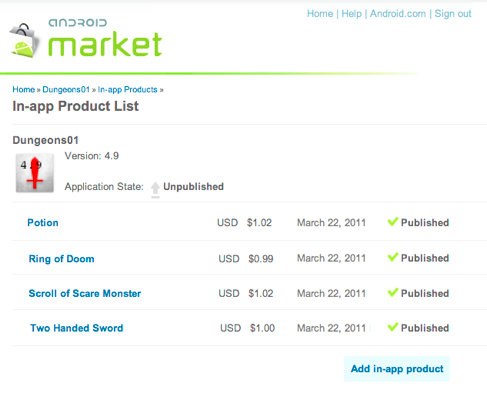 One of the biggest gripes Android developers have about the ecosystem has been Android Market — it was slow to add support for paid apps internationally, and it’s taken ages for it to support in-app payments. Today, it’s finally fixing the latter issue: Android Market now supports in-app billing.

The news doesn’t come as a big surprise, as Google pre-announced the feature’s impending launch last week so that developers could prepare for it. But it’s still a big deal. In-app purchases have proven to be very lucrative for developers on Apple’s iOS (which launched in-app payments back in 2009). They’re particularly important for free applications, which often entice new users with a price-tag of ‘free’ and then upsell new levels, upgrades, and customizations.

As with application purchases, Android Market charges a fee of 30% for anything sold via in-app billing, which is the industry standard.

Hopefully this will help developers more effectively monetize their applications on Android Market — historically users have been less willing to pay for apps on Android than they have on Apple’s App Store.