Google is launching a new ‘Media Ads’ format for video ads on Google.com. The ads will appear as small thumbnails with a play button, and when a user clicks on the thumbnail, the video ad will expand and take over the Google search page, playing the video ad in a larger player. The ads seem to be a natural extension of Google’s existing ad products, but are interesting when you consider the focus on media. Clearly, Google is going after big ad dollars spent by media companies when promoting new movies, TV shows, and more on the web. This is another way to grab a piece of that pie.

So for example, if you search for Lincoln Lawyer, a recently released movie, on Google, you’ll see a search ad below the search box. When you click the ad, instead of being taken to a new site, a trailer video will pop up and play within the search screen. Essentially the format attaches a video player to existing AdWords ads.

Google says that with this ad format advertisers don’t need to pick any keywords to promote the ad (clicks on Media Ads are charged at a flat rate). When a search term is entered on the search engine that Google’s algorithm determines is related to the advertisements (i.e. titles or variations), Google will display the Media Ad below the search box, on top of search results.

Another new part of the Media Ad format is a new, shiny Lightbox media player for the video ads when expanded. When you click on the ad and it expands to the center of the screen, the player will dim the rest of the page around it. As Google says in its blog post, the entire viewing experience is meant to draw the viewer’s attention to the video in a more visually appealing experience.

Initially, this ad format is be targeted for movies, as Google’s research shows that when someone searches for a movie title on Google.com, they’re most commonly looking for a trailer. But over time, Google plans to launch Media Ads for other video-centric segments.

Google announced the new format at the Search Engine Strategies Conference today. The searcg giant also revealed that 10% of all ads currently feature a new ad format that Google has rolled out over the past 15 months (Sitelinks, Product Ads, etc.). 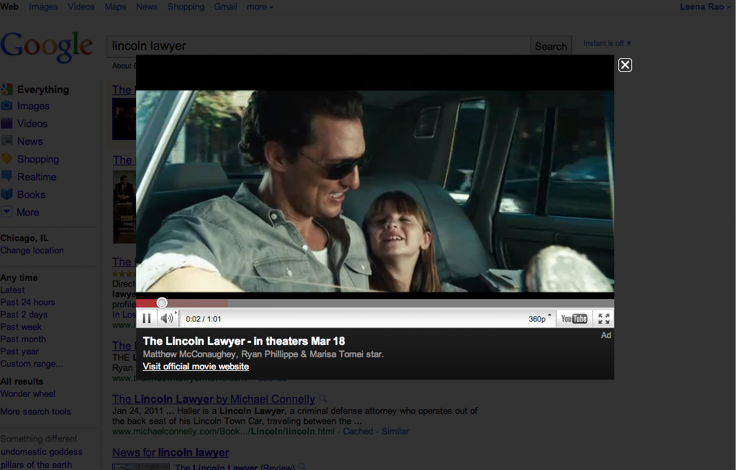