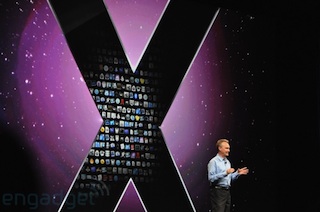 Back in October of last year, the day before it was formally unveiled, I wondered if OS X Lion would be the last of its kind. There were two main arguments: the big cat name choice and the colossal rise of iOS. With today’s news that OS X father Bertrand Serlet is leaving Apple after 14 years (and 22 years working with CEO Steve Jobs), the question has come roaring back to life.

Apple has been giving OS X big cat nicknames since 10.0 (though they started off as informal codenames at first). The forthcoming latest iteration, OS X 10.7, has been given the name “Lion”, the king of the jungle. But more important than the name is what’s inside Lion: iOS-like features. A transition is happening. Apple made this very clear during the initial preview of Lion. It’s OS X meets the iPad.

Some have been interpreting this transition as a reason for Serlet’s departure. After all, why would he leave now in the “middle” of OS X Lion’s development, as Gizmodo puts it, unless he was unhappy? But the truth is that OS X Lion is pretty much locked and loaded at this point. There’s undoubtedly polish being added, but it’s being released to the public in a few months after a few years of work. Apple does not allow outsiders to see products in the “middle” of their development, and yet a developer beta of Lion has been out for weeks now.

This is not the same as key Chrome OS architect Matthew Papakipos jumping to Facebook last year. As it turns out, Papakipos actually did leave in the middle of development, as Chrome OS still has yet to be released to the public. The fact that Chrome OS is already about six months late from Google’s initial timetable (and is still a few months away) suggests Papakipos may have seen the writing on the wall. Again, that doesn’t appear to be the case with Serlet here.

Nor is this like the situation in which SVP of Devices Hardware Engineering, Mark Papermaster, left Apple last year amid the iPhone 4 antenna controversy.

Instead, Serlet appears to be transitioning out at a very natural time, as Digital Daily’s John Paczkowski details today. “He’s leaving because he feels it’s time and likely because Lion seems a perfect monument to his legacy at Apple,” Paczkowski writes.

At the same time, we are well into a massive software shift at Apple. Last quarter, Apple sold roughly 34 million devices that run iOS. During the same time, they sold about 4 million Macs running OS X (which was also a new record, by the way).

That’s not to say OS X is no longer important to Apple. Quite the contrary — you can’t make apps for iOS without OS X. And, of course, iOS is directly derived from OS X. We’re simply seeing the two begin to merge into a more unified experience. And new vice president of Mac Software Engineering, Craig Federighi, is leading that charge. That’s exactly why he took the stage last October to show off the new iOS-like features of Lion (whereas it was Serlet who took the stage two years ago to show off OS X Snow Leopard). It’s no longer point & click, it’s flick & swipe.

The main question still remains: is OS X Lion the last of its kind? Will Federighi’s first duty as head of Mac software be to more fully merge iOS and OS X? Will that be a “Mac OS XI” (or perhaps more appropriately, “OS Xi”) or something else?

Serlet may not be leaving as a result of OS X becoming more like iOS, but it’s happening nonetheless. Both appear to be natural transitions.