More and more businesses are using social media — from Twitter, Facebook and LinkedIn, to Tumblr and Foursquare, more recently — to manage customer relationships, market, sell or even directly conduct their business transactions. With the maturation of the technology and business practices comes regulation from government agencies including the Federal Trade Commission (FTC) and the Financial Industry Regulatory Authority (FNRA) in the U.S. and the Office of Fair Trading (OFT) in the U.K.

A New York City startup, CMP.LY (pronounced “comply”) today announced that it has raised a $750,000 seed round to provide web-based software and services that help companies play by the new rules. CMP.LY’s backers included: Safir Capital, Angel Street Capital, Austin-based investor and serial entrepreneur Joshua Baer, and undisclosed angels who the company connected with, in part, through AngelList.

CMP.LY’s technology monitors and documents a company’s social media interactions, and automatically publishes required disclosures within status updates and blog posts. It also provides short URLs to include in tweets. The disclosures take the form of either a short URL, or an icon (CMP.LY calls it a “badge,” image below) that link to a company’s detailed disclosure.

Tom Chernaik, CMP.LY founder and chief executive, expects the technology to help any business that does significant outreach to bloggers and social media influencers to solicit reviews, brand mentions and more. It could also help: media professionals who have obtained samples, sponsorships or ad support from a business to be transparent about the ways their content, advice or reviews may have been influenced; and businesses that make health and environmental claims about their products, to ensure that consumers understand the technical limits inherent in those claims (Claims like “organic,” “low-calorie” or “carbon netural” may need more explanation than “gluten free,” of course.) 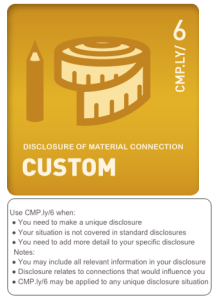 Financial professionals, especially, have been skittish about using social media. As Jim Pavia reported for InvestmentNews this week, financial firms have been hesitant to use social media, with the threat of legal and financial troubles that could result from a regulatory violation:

[At the same time…] just 35% of financial advisory firms are using social media, compared with 85% for other businesses.”

CMP.LY could collaborate with, or face competition from large tech consultancies that offer compliance solutions to different industries, but also from startups like linkedFA, which scored $3 million in a series A round, the firm announced yesterday, for a social network that has compliance tools baked into their web offering, a social network for insurance and finance professionals.