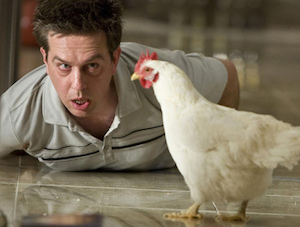 Earlier today, it was revealed that Microsoft was suing yet another company for infringing on their patents. The target this time? Barnes & Noble. Yes, Microsoft is suing a book chain. Why? Because they claim the Nook e-reader (which runs Google’s Android OS) copies status bars from Windows CE. Or something. If you’ll excuse my bluntness, it’s all a bunch of bullshit.

Devin has a good overview on CrunchGear of what the patents in question actually are. The whole thing is laughable. And everyone knows that except one party: Microsoft. The company has become completely drunk on their patents and subsequent lame lawsuits. And as a result, they’re quickly losing the hearts and minds of just about everyone that doesn’t work in Redmond.

So what is behind all of this? Is Microsoft really trying to stop Barnes & Noble from selling the Nook? No. Instead, they’re trying to force them to license the use of the patents from them so Microsoft can get a piece of the action for each Nook sold. How do I know? Well first of all, it’s a tactic Microsoft has been using for a while now.

In October of last year, Microsoft sued Motorola over their Android-powered phones. What was odd was that they weren’t suing HTC for the same thing — because they reached a patent licensing agreement with HTC for that very reason. Microsoft’s maneuver was simply trying to get Motorola in line to do the same. And now they’re doing the same thing with Barnes & Noble.

At least today they’re not beating around the bush anymore. Microsoft’s own General Counsel, Horacio Gutierrez, has put up a post on the issue with a title containing the words “Licensing is the solution.”

And to pre-empt posts like this one, Gutierrez notes, “Microsoft is not a company that pursues litigation lightly. In fact, this is only our seventh proactive patent infringement suit in our 36-year history. But we simply cannot ignore infringement of this scope and scale.”

Okay, let’s examine that “scope and scale” in Microsoft’s own words. In the post, Microsoft notes the following infringements by the Nook:

“Easily select text”? “Navigate through information”? “Annotate text”? I mean, it reads like a joke, but it’s not. Next up, Microsoft is going to sue over the ability to type, look, and maybe even breathe. I’m sure they patented those things at some point over the past 30 years. They have something ridiculous like 20,000 patents.

And again, the worst part is that the suits are hollow. Microsoft really does not care about Nook sales being stopped because they’re copying their “innovation” — they’re happy to have them keep selling, just as long as Barnes & Noble pays them for each one sold.

Other companies, like Apple, for instance, may be no more in the right over these bogus software patents. But at least they really believe that companies like Google (by way of HTC) have copied their intellectual property and want them to stop doing it. For Microsoft, this is a business model.

The truth is that this laughable model is just an extension of the one that made Microsoft, Microsoft: licensing. Microsoft grew to where it is today because computer makers licensed Windows and Office. But as we dive into the mobile age, that model is not only broken, it has been destroyed. Google is licensing Android — but they’re doing it for free. It’s exactly why they were so easily able to kill off Windows Mobile.

Of course, Microsoft doesn’t understand that this model no longer works and they’re still trying to get OEMs to pay for their new Windows Phone OS. In fact, they’re even making new buddy Nokia pay them a licensing fee per phone! (While at the same time paying them back in billions of dollars in marketing and development costs.) It will not work.

And now we’re on to licensing fees 2.0: patents. How long until Microsoft is making more money on patent licensing than from their mobile unit? Serious question. Maybe they already are.

Even worse is the way Microsoft is going about all of this: straight-up bullying. That’s the only reason they’ve included Foxconn and Inventec in the most recent suit. Those guys have nothing to do with the infringements in question, but Microsoft is trying to apply pressure from all sides. And as more companies build products using Android, they’ll keep doing the same thing.

How swell. What great guys.

“Last year, HTC took a license covering its Android-based smartphones, confirming the viability of our license-first approach. In the e-reader space, Amazon.com signed a patent license with Microsoft last year covering its Kindle device. And many other device makers have also taken licenses to Microsoft’s patents under a number of existing licensing programs,” he continues.

If your friends jump off a bridge…

The bottom line is that this needs to be stopped. Microsoft is threatening innovation across a range of industries with their attempt to instill their next great business model. The most bullshit business model of all time. This is the future of Microsoft, people. Is it any wonder why they’ve fallen out of favor with the general public? No one likes rooting for a jackass.

My favorite part of all of this is just how oblivious Microsoft is. Not only do they have Gutierrez writing ridiculous posts like the one today. They have their PR company, Waggener Edstrom, sending out emails to the press trumpeting the lawsuit! Hip hip hooray!

Microsoft still has many talented people doing great things. Kinect and even Windows Phone (the product, not the strategy) jump to mind. But the suits and lawyers are burying all of that under 700 metric tons of bullshit.

Update: And remember, according to Microsoft CEO Steve Ballmer, Android isn’t really free — you have to pay Microsoft a licensing fee for the patents.