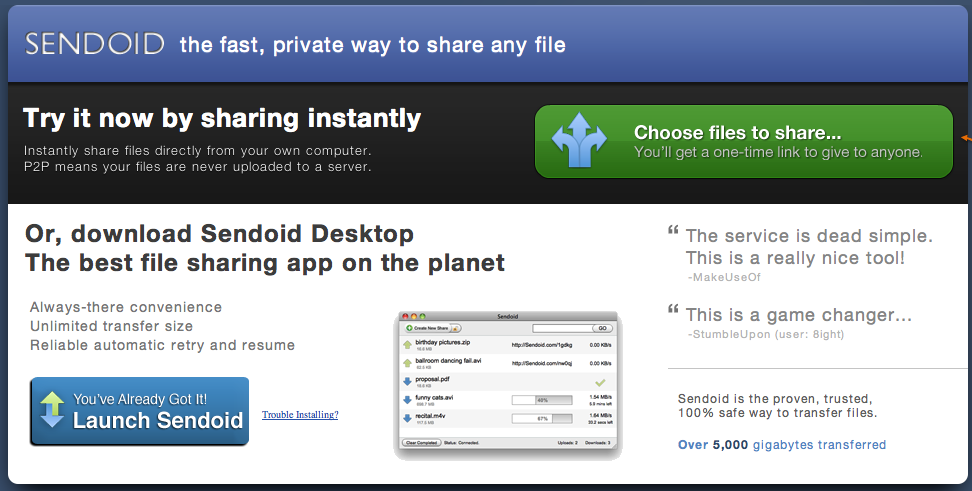 When it comes to files, we love to share. No, we need to share. Thanks to the massive capacities of Gmail and other email services, it’s become remarkably easy to share files.

Of course, most email services limit the size of the file you can share. Gmail’s, for example, is 25 megabytes. But if you want to share a larger file or multiple files — and even want a little privacy in doing so — you have to go elsewhere. As a result of these limitations, many peer-to-peer file-sharing services have popped up in an effort to fill the demand for transferring those hulking files you’ve got lying around.

Unfortunately, most file transfer services tend not to be particularly user friendly. They have awful UIs that can be difficult for the uninitiated to maneuver, test your patience with wait times, employ captcha guards, and can require sender and receiver to download the same software. There are plenty of apps out there that work towards finding a way around these problems and sites like WeTransfer and senduit offer the ability to share big files easily without the hassle and clunky interface — for free.

But even these services have size limits and haven’t really put all questions of security to rest. So, launching today, is Sendoid, a Y Combinator-backed startup that is aiming to become the last file transfer service you’ll ever use. Besides BitTorrent, of course.

Sendoid is a peer-to-peer and browser-based service, so the startup is betting that peer-to-peer sharing will mean faster transfer times than if you were to use a service that transfers via a central server — and that being browser-based will make you happy because there’s no software to install.

The in-browser sharing works by opening a 128-bit Advanced Encryption Standard (AES) encrypted pipe directly between the sending and receiving machines. Sendoid handles the connection to a peer introduction service, but all the data flows direct.

When it comes to sharing videos, music files, or photos, many people simply take to sharing links. Sendoid recognizes this trend and makes it so that, if you want to send a file, all you have to do is go to sendoid.com and select the file you want to transfer from your computer. It will then provide you with a URL, which you can send to the recipient to download. As long as the recipient is online, he or she can then open the link and begin download. Bada bing, bada boom.

Now, when I said that Sendoid doesn’t require you to download any software, that’s not totally true. Within the in-browser experience, Sendoid limits file size based on system resources (generally somewhere between 600MB to 1GB depending on the user’s configuration). If you exceed these limits, you will be prompted to download and use its desktop app. Sendoid remains free and speedy once you download the app, and you no longer have any limitations on the size of file you can transfer.

Most of the file transfer services out there are cloud-storage sites being used for file transfer or web-based bit torrent clients — and they don’t always require a password — so your files are stored on external servers. Because Sendoid is a link-based service, your files are only passed directly between parties, so you won’t have to worry about who’s touching the data on its way.

So, if you’re sending a large file to someone on a machine 5 feet away from you on the same network, you’re going to get much faster transfer speeds. According to Sendoid Co-Founder John Egan, Sendoid can transfer a 100MB file in approximately 35 seconds, versus the 25 to 30 minutes it might take a server-based service.

Partial uploads presently work desktop to desktop only, which includes a resume and restart function, regardless of which side disconnects. Adding this functionality for the web-based version is coming soon, Egan said.

Egan and his partner, Zac Morris, are both engineers and have been working on Sendoid for the last year. They created Sendoid, he said, because they were living on opposite coasts, working on a few other projects (Morris is a former Apple engineer), and had to constantly move large sensitive data back and forth (files larger than 500MB). They were unable to find any other services that opened an instant, direct connection and didn’t want to pay Yousendit $10 to transfer a single file larger than 100MB.

The earliest prototype of Sendoid, Egan told me, was a site called iSendr that they created in May of last year to test out the p2p technology. The prototype drew nearly 20K visitors on the first day and pushed them to apply to Y Combinator.

So how will Sendoid make money? Egan said that the business model will supplement free, unlimited transfers with premium services. Since you can send files “out-of-network” with Sendoid, Egan sees the service being particularly useful to film studios, enabling them to move raw media to post production, or to pharmaceutical companies to transfer confidential data within the company. Of course, these companies would require additional security controls and auditing beyond what Sendoid currently offers, so they would be required to pay for these added features.

Egan also said that they are looking to build a “premium groups” feature for intra-group sharing, where users can browse live shares from others in a realtime, collaborative environment.

Sendoid is currently in the midst of raising its first angel round and is working on apps for both iOS and Android.

It’s a cool service and, from my experience thus far, is quick and easy. So check it out.

Update: I think it’s worth pointing out that I am by no means familiar with every file-sharing service out there and no doubt have missed a few, so please chime in via the comment section to share what service you use and find to be the speediest.

Commenters also noted that I did not mention Dropbox, Box.net, or Ge.tt. All three of these companies offer fantastic services and, of the three I personally use Dropbox all the time — for work and personal file sharing. But, rather than debate which is the service to end all services, it’s probably best to see Sendoid as a complement to these file sharing tools. Each of them are, really, cloud-enabled file hosting services that offer sharing, and sync.

Sendoid differs in that it is peer-to-peer direct, so there’s no cloud and no size limit. So, if you take the example of Dropbox, you have a 2GB limitation (for starters), whereas Sendoid allows you to transfer those big 100MB+ files you have on Dropbox directly to another party’s hard drive. Though Dropbox is pretty reliable, services like Sendoid allow you avoid having to rely on the provider to always have their cloud up and running. The person receiving the file can start downloading without having to wait for you to upload and, in terms of transfer speed, it’s really as fast as your and your recipient’s network connections. If you’re working with fast networks, it’s a breeze. So if you need to transfer a big file to a colleague who lives across the country, and need to do it fast and securely, I’d say Sendoid is worth trying.