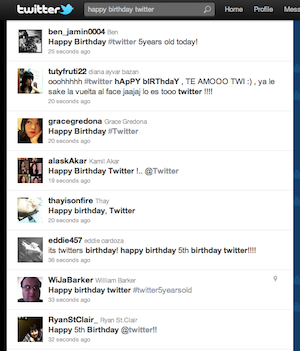 I woke up this morning and my Twitter stream looked like a Facebook Wall on a teenager’s birthday. “Happy birthday, Twitter!” “Twitter, you’re the best, happy bday!” “Can’t believe you’re five Twitter!” These messages came in fast and furious from folks in the tech sphere, folks not in the tech sphere, celebrities, Twitter employees. On and on and on.

And that’s great. Twitter is awesome. Even if you’re unwilling to admit that it has changed the world, there’s no denying that it has drastically changed the tech landscape and the way information is created and consumed. And it continues to do so. So yes, happy birthday, Twitter.

And now it’s time to get back to work.

A couple self-congratulatory posts on Twitter’s main blog and the engineering blog today made it very clear that Twitter is now at the point architecturally where it’s full-steam ahead time.

There are now more than 400 full time employees working at Twitter. In the last year alone we have made huge progress towards stability and performance. This work sets us up to continue innovating but it also allows us to build a profitable business on a strong foundation. We are in a position now which allows us to continue serving and delighting everyone who relies on Twitter to connect them to that which is meaningful for another five years and beyond.

Last September, we began executing on this plan and undertook the most significant engineering challenge in the history of Twitter. We hope it will have a significant impact the service’s success for many years to come. During this time, the engineers and operations teams moved Twitter’s infrastructure to a new home while making changes to our infrastructure and our organization that will ensure that we can constantly stay abreast of our capacity needs; give users and developers greater reliability; and, allow for new product offerings.

Abbott goes on to detail how they executed their plan, including the need to move all of Twitter — 20 terabytes of tweets — two different times. He promises that they’re now in their “final nesting grounds”.

That’s great news, because it’s time now once again to focus on a couple core assets of the product that have long been neglected: search and the tweet archives.

It may be hard to believe now, but back in they day, Twitter had no search capabilities. Instead, a startup named Summize rose out of Betaworks and was quickly scooped up by Twitter in the summer of 2008 and turned into Twitter Search. As a 1.0 product, it was great.

But the problem is that Twitter Search hasn’t changed all that much since then. It’s still basically just a keyword search that lists items in reverse chronological order. Sure, they’ve added top retweeted items to the top of results. But as Twitter has grown, searching for anything beyond the most topical level is basically worthless.

In fact, FriendFeed, which was acquired by Facebook in 2009 and basically hasn’t been touched since, is still a much better Twitter search tool. At least it lets you search your own tweets and/or limit search to groups.

Twitter does have advanced search tools, but they’re buried on the stand-alone Twitter Search site that basically no one uses any more. And even those aren’t really any more powerful than they were a couple years ago.

Worse, results only go back five days. Let me repeat that: you can only search for tweets as far back as five days ago. That’s ridiculous.

Twitter’s stated reason for that is because they’re focusing on “real-time relevant” tweets. That reasoning makes some sense given Twitter’s nature, but it was also undoubtedly an engineering decision. Now that things seem good on that end, it’s time to expand.

We’ve been writing about the dream of Twitter as a serious search engine since 2009. But things have been rocky on that side of the product ever since. We’ve had teases that things were on the mend. But so far, not much to show for it. It’s time. 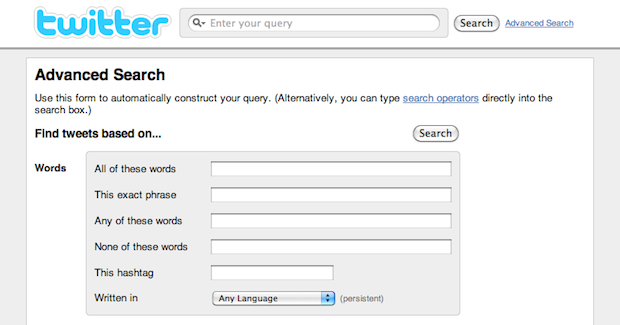 Another untapped treasure trove is tweet archives. Face it, a part of Twitter is about vanity. And that’s why it’s kind of insane that you can’t see what you’ve tweeted or what others have tweeted at you beyond a few days in the past. Just imagine if you had full access to your tweet archives.

Better: imagine if Twitter organized your tweet archives in a way that was useful. What if you could see what you talked about most often during a set period of time? Or if you could see your tweets in a calendar view as a ready-made diary of sorts? Sure, some third-party services do some of this, but Twitter, with full access to all of the data, could presumably do it better.

One of my favorite features of Foursquare is the History page. And the latest version of the service is finally taking advantage of it, telling you things such as the last time you checked-in to a particular venue. Imagine if Twitter could tell you the same types of things about your tweets?

Twitter has saved all of the tweets ever sent (again, some 20 terabytes worth), but the vast majority are just sitting there, dormant. There are a number of ways to make them useful again. If nothing else, for nostalgia purposes and pure vanity.

Whether or not Twitter will start focusing on either of those elements is anyone’s guess. Certainly, the drive to start generating revenue is well underway, and you’d think that search is a natural expansion area for that. So far, it has already been a key area with Promoted Trends and Tweets. But again, it could go deeper.

Tweet archives area a less obvious monetizable area. But search monetization might work there as well. Or I’d gladly pay something like $20 a year to be able to access my entire archive of tweets in an interesting way.

There are other things to focus on as well. One is geo. What on Earth is happening there? It entered in 2009 with much fanfare, now there’s talk that the team has been disbanded and assigned to other projects.

And what about annotations? Few Twitter products have generated as much buzz and hype, only to see nothing come of it. Last we heard, they were officially put on hold indefinitely. Is now the right time to bring that project back as well?

Again, happy birthday Twitter. It has been a great five years, and I’m really happy for all your success. It sounds like you’re now in a good place — time to finish up the cake and get back to work.