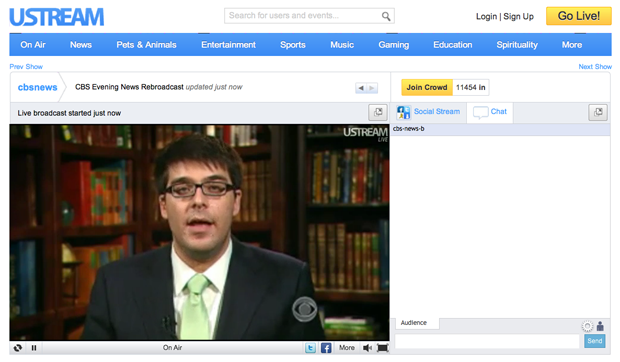 Video service Ustream has seen an interesting six months, between broadcasting the Chilean miner rescue, the news feeds of revolutions in Tunisia and Egypt, the debut of the Charlie Sheen show and the news surrounding the Japanese Tsunami and earthquake last Friday. VP of Marketing and Communications Lynn Fox tells me that the service has seen unprecedented growth, and hit 10 million total broadcaster signups at the end of February, averaging a rounded 20% growth month over month since December.

According to Quantcast, Ustream’s monthly unique viewers are 60 million across the entire network. Vistors to the Ustream site have grown from 18 million in January to 25 million in February, and are on a trajectory to grow 10% on the 25 million to 27.5 million in March. 174,000 broadcasters signed up in the past month alone. (I’m still waiting for word on how many of those are active users.)

Fox also tells me that revenue was also at all time high and that Ustream has had nine straight quarters of growth — at 45% average growth month over month. Fox would not tell me whether the company had yet achieved profitability.

Fox attributes the service’s upswing to combination of good content choices, product improvements and increased awareness. Future plans include, “Improving what we already have, and continue to improve platform monetization with Pay Per View and Ad Free and other services.” Ustream monetizes through a combination of advertising, pay per view, ad free and conference production services.

Ustream, which has $87.8 million in funding, revamped its mobile app (combining both broadcasting and streaming capabilities). It also recently announced that all 4G Verizon Android phones will be bundled with Ustream as well, further increasing potential for mobile distribution which grew 77% from January to February.

Most recently the news surrounding the Japan earthquake brought in record numbers of viewers, apparently people flooded Apple stores on the ground in order to watch the news on the service. On just the day of the quake Ustream hit 7.2 million views due to all of us who were glued to the stunning and terrifying imagery on the streams, an audience greater than Sheen’s antics and greater than those who watched the Chilean miner rescue.