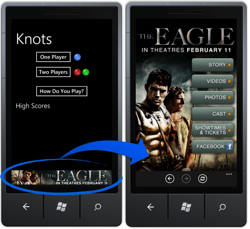 Google-owned mobile ad network AdMob is announcing a number of new products and features today for developers and advertisers. This includes the launch of the beta SDK for Windows Phone 7, which will allows these platform developers to advertise via AdMob.

Google director of engineering Mark Schaaf (who is a former AdMob Engineering Director and the network’s third employee) says that the addition of Windows Phone 7 SDK aligns with Google’s openness strategy, which in AdMob’s case, allows developers and advertisers to users across multiple mobile platforms. He says that the AdMob network currently includes more than 50,000 mobile applications across iOS, Android, and webOS platforms.

Similar to the iOS and Android experience, developers using Windows Phone 7 SDK can use the format to integrate AdMob advertising into apps, control where ads appear, and what types of ads are served. The ad unit supports a variety of post click actions including opening a webpage and linking directly to the App Marketplace. And the Windows Phone 7 beta SDK currently supports text and banner ads and can be downloaded by creating a new site on AdMob.

AdMob has also updated iOS and Android SDKs with HTML5 support for its ad units, allowing advertisers to create more rich media advertisements that can be viewed across platforms. Previously, the formats were written in Google/AdMob’s own markup language, but with the addition of HTML5, Schaaf says that the format gives advertisers and developers more openness across many platforms. He says that HTML5 allows advertisers to do more with less coding and also allows for more seamless transitions and formats on devices. Additionally, AdMob is also supporting full screen interstitial formats for tablets on iOS and Android.

The move to HTML5 isn’t surprising for AdMob, considering that Google is a huge proponent of HTML5.

From the ad requests standpoint, AdMob appears to be growing under the Google umbrella. We heard earlier this year that AdMob is currently receiving 2 billion ad requests per day, a data point which has quadrupled over the past year. But there have been rumors that the transition isn’t going so great over at the Googleplex, which is of course contradictory to Google’s growth stats.

Regardless, mobile advertising is a multi-billion industry, and there’s no doubt that Google will continue to innovate so that it can take a piece of this enormously large pie.