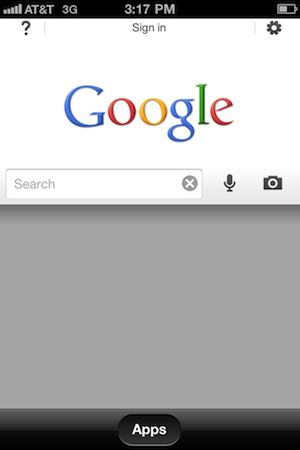 Google’s flagship native app for the iPhone has always been a little odd. First of all, it was called “Google Mobile App”, which seemed a bit redundant. More importantly, it just wasn’t really worth using instead of google.com in the Safari web browser itself. But a big update today fixes both issues — and showcases how it could be ever better still.

What was the “Google Mobile App” is now simply “Google Search”. And as you can see, it looks completely different. The homescreen is now a nice big Google logo with the search box. It also allows you to easily sign in to your account. And when you do a search, this graphical interface rolls upward to reveal the results. And a swipe to the left reveals different categories to filter your search.

In other words, Google’s native iPhone app finally feels pretty native, rather than just feeling like their mobile website crammed into a native shell. And the swipe-activated filters, voice search, and Google Goggles all bring the native awesomeness. And the Push Notification options for Gmail and Calendar finally seem to be speedy enough to actually use.

But again, it could be even better.

At the bottom of the screen in the app is an “Apps” bar. This both gives you one-click access to Google’s entire list of mobile apps and shows you Gmail unread counts, which is great. But the apps themselves are still mobile apps, not native ones. So when I see I have unread Gmail messages, I’m kicked out of the app and into Safari to load it on the web.

Mobile Gmail is just about as good as a mobile app can be in my opinion, but it could still be much more powerful as a native app. HTML5 just isn’t there quite yet. Now, who knows if Apple would even approve a native Gmail app, but if this new Google apps had native Gmail built-in, it would become my most-used app immediately.

Calendar and Docs would be better too in a native skin, rather than a mobile web one for now.

Still, the app is definitely an improvement, and a great upgrade. I anticipate actually using it now. Now if only Google could fix the bugs and slowness in the native Google Voice app… 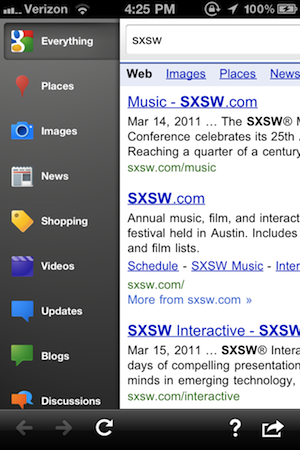 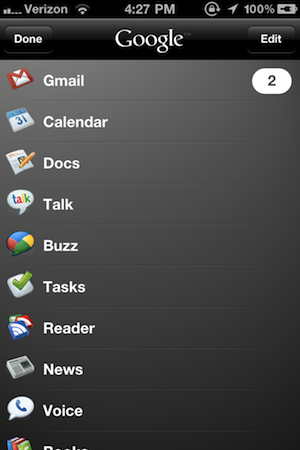