“The must-have app of SXSW would be the one that lets people with hangovers order Gatorade/Advil deliveries. Make it happen Zaarly.” — Jason Kincaid

If you’re like most people at SXSW the time change today and the drinking last night has hit you like a iron hammer. Well luckily Zaarly, the much buzzed about HTML 5 mobile app that connects buyers and sellers in a localized market place, is now live today in Austin. So if you’re stuck in bed needing Gatorade and Advil (or a change of clothes, or an iPhone charger, or …) you can now hit up Zaarly.com on your phone and put in your order.

With Zaarly people who want things and people who want to provide services are brought together in an unprecedented way, with the focus on the buyer’s needs as opposed to the sellers. Buyers post what they want and how much they’re willing to pay and sellers can log in to Zaarly view the needs and prices of tasks around them. Sellers bid for the tasks, and the buyer chooses the best one, with Zaarly connecting the two via an anonymous Twilio-powered phone number.

While, like Craigslist, the service basically runs on the honor system, Zaarly community managers keep close watch and filter out bogus and inappropriate offers. 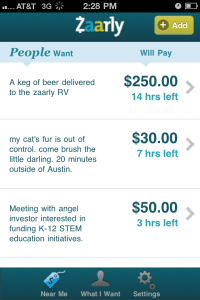 Zaarly also has an amazing story, having gone from an LA Startup Weekend winner to 1 million in funding in a little under 3 weeks, impressing the likes of Paul Buchheit, Ashton Kutcher, Felicis Ventures, Bill Lee, Naval Ravikant and Lightbank with its disruptive concept, despite being a work in progress.

I caught up with co-founder Bo Fishback here at SXSW, paying a visit to the Zaarly “mobile world headquarters,” or basically an RV in a parking lot by the Austin Convention Center, to talk more about the ins and outs of the proximity based market platform. Right now Zaarly is only live in Austin, but Fishback tells me he will be rolling it out on a city by city basis after the SXSW push is over. Stay tuned, and hydrated. 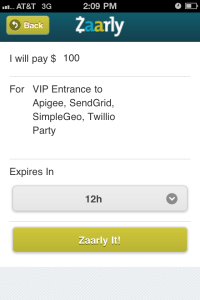