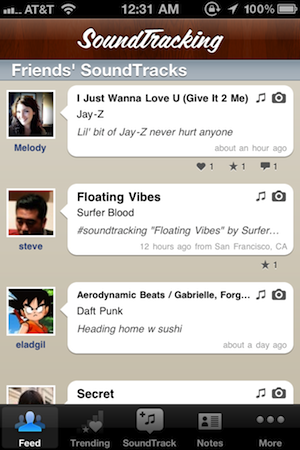 The idea for SoundTracking came about when founder Steve Jang realized that you could easily share all of these other bits of information easily via your phone, but not the music you were listening to at the moment you were listening to it. Sure, there are some great music identifying apps like Shazam and SoundHound. And there are plenty of music playback and recommendation apps like Rdio and Pandora. But they aren’t inherently social. That’s the key in Jang’s mind to nailing what he calls “your music moment.”

And this music moment is about more than just the music. The music is the key, but it’s also about sharing where you are (location), letting your friends see what you see as you share a song (picture), and explaining your situation a bit (comment). All of those are baked-in functionality for SoundTracking a song. “You don’t just want to share the Bon Iver song. You want to share it with the image of raindrops on your window,” Jang says, only half joking.

But he’s right. Musical experiences are often about more than the music. They’re about what you’re doing when you’re listening to the music. And that’s exactly what SoundTracking facilitates the sharing of.

To share a song, you simply fire up the app and do one of three things. If you’re listening to the song already on your iPhone or iPod touch, you can click a button and have the app identify it (band and song title). If there’s a song playing through some external source, like the radio, you can fire up the Gracenote-powered listening engine which will ID the song. Or you can manually enter in what you’re listening to via a search.

If you share a picture with the music, that will be the background of your share. Otherwise, SoundTracking will find the album art for the song you’re sharing. It all works very smoothly.

But none of that means much unless the people on the other end of your share can hear what you hear. So SoundTracking has woven in full iTunes Store support into the app. This means that each share (assuming the song is available on iTunes) will come with a 30-second preview to hear the song. And if you like it, it’s just one click to head over to iTunes to buy it.

No, you don’t get the full song experience. But they’re looking into possible partnerships down the road for full song playback.

Obviously, all of the other standard social keys are in play here. You’ll follow friends in the app, and their shares will populate your main feed. You can both “like” and “love” songs, as well as comment. And you can also see what songs and locations are trending based on network-wide activity.

Jang likes to think of SoundTracking as a sort of “musical postcard”. Again, the thinks the combination of elements in the app help users tell a story through music. And they couldn’t have picked a better time to launch as SXSW starts today, with the music portion taking place next week. Of course, they’ll have some competition from day one: AOL is launching a competing app called Play — though it will be Android-only at first, while SoundTracking will be iPhone-only at first.

But it’s important to note that SoundTracking is just the first app in a grander vision that Jang and co-founder Matt Paul have for Schematic Labs. They aim to build mobile-first entertainment apps across a bunch of different verticals. And they’re already working on their next project. But first, they’re going to obviously do an Android version of SoundTracking as well.

Find SoundTracking in the App Store here. It is a free download.

Update: Previously, I stated song previews were 90 seconds — that’s only on iTunes itself. Partners get 30 second previews. 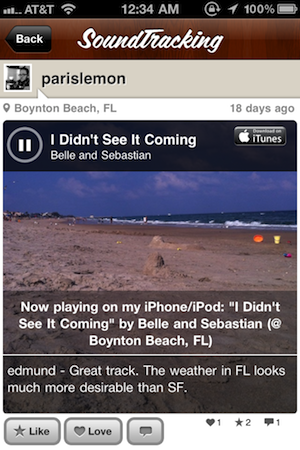 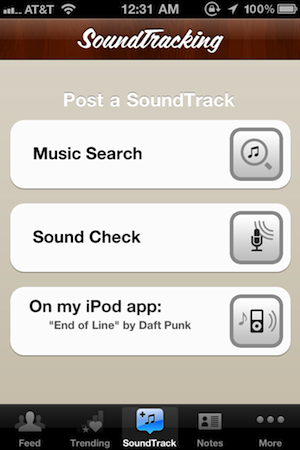