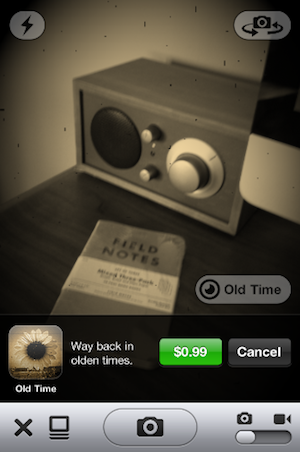 Don’t sleep on the mini mobile photo sharing battle that is going to take place at SXSW this year — the companies involved aren’t. Following updates to PicPlz and Instagram, Path has just rolled out a significant update to their iPhone app. It brings four key things: Facebook sharing, lenses, an activity stream, and a new friend suggestion tool.

Of these, the connection with Facebook is clearly the biggest. Up until now, Path has been a closed network in the sense that moments could only be shared with your Path friends. Unlike most social networks, which start out with sharing options to Twitter and Facebook (and even heavily encourage sharing to them to leverage their graphs), Path had been going it alone. But today that changes. Following the option to find friends via Facebook Connect which was added this past December, Path now allows you to publish moments to your Facebook Wall, the next logical step.

This is a much-requested and welcomed new addition for Path for the moments that are less personal, and you’d like to share more broadly. And again, it makes sense. This extends the reach of Path by leveraging the largest social network on the planet, which Path co-founder Dave Morin happened to work at for several years. “I’ve been calling it ‘harmony’ with Facebook,” Morin says of the new options. 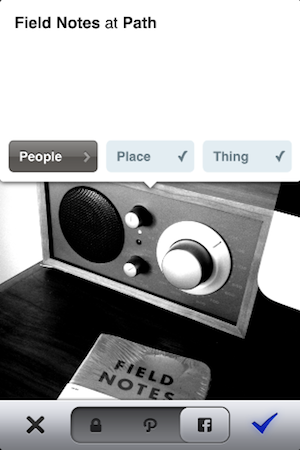 The other big update in Path 1.5 are the lenses. This brings Path up to speed with rivals like Instagram and PicPlz. But again, there’s a twist here. Actually two of them. First, these lenses work on both pictures and videos. There are a few other apps out there that do this for video, but none have hugely taken off — this should be a really fun feature for Path. Second, Path is introducing both free and premium lenses. Yes, the money-making adventures begin now.

To begin with, Path will offer four lenses for free: Pro, Ansel, Instant, and Diana. And three for $0.99: Old Time, The Grid, and 8-Bit. Morin says it’s more of an experiment at this point and less of an actual business model. “But, we see a long term revenue opportunity in premium expression through virtual goods like this,” he says. “Just like people buy different kinds of clothes to express themselves,” he continues.

He also notes that they’ll be continually rolling out new lenses, which they are developing in-house.

Previously with Path, if you wanted to see who commented or left emoticons on your moments, you had to scroll through your feed. But a new activity stream aggregates that information to make it easier to see. “You have a feed of who’s stopping by and paying attention to you,” Morin notes.

Finally, Path is launching a new social graph booster called “FriendRank”. Essentially, it’s a friend recommendation service that looks at your Facebook connections and serves up new friends to share your moments with. The feature guesses who your top five friends are.

Path 1.5 should be going live in the App Store this afternoon. Find it here.