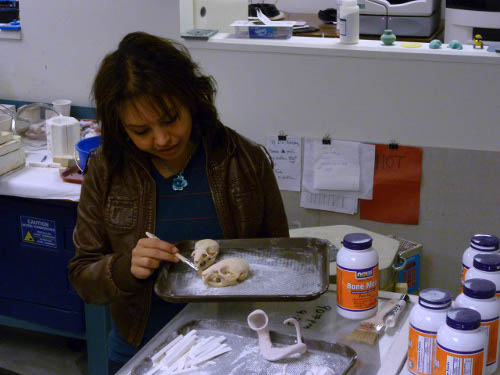 The folks at 3DP at the University of Washington have rendered 3D bones in bone meal, 12x Powdered Sugar, and malodextrin. The resulting project – an effort to “print bones of animals that never existed” – is fairly creepy but if scientists could create actual bone in the same way, imagine the possible uses: hip replacements, skull fragment fixes, and the addition of three inch tusks to my otherwise normal, mid-western visage. William Gibson, we are with you in the Sprawl.

Here’s a great back-and-forth about the morality of 3D-printed bone:

We loaded up the 3D printer with a bone powder mixture and used an existing binder solution. Let’s just say our first 3D printing tests were not terribly successful. The parts were so weak that any contact caused crumbling, and we could not remove the parts from the powder bed. However, the bone powder mix spread extremely well, produced a nice surface finish on the printing-bed surface. The parts needed to be strong enough to survive general human handing, depowdering, and post processing. Finally, really results!
But WAIT! After the first parts were printed, there was a long pause and a sigh heard from Juliana.
“I don’t know what to do here.” “I don’t know how I feel about touching these parts.”
“Why?”
“I’m a vegetarian!”
“What?”

After the malodextrin failed to stick, they started using UF plastic resin glue and that seemed to do the trick.