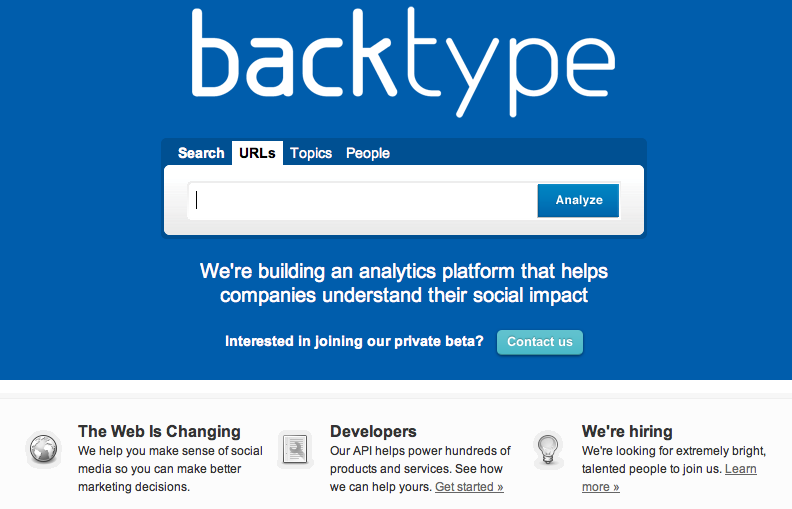 BackType adds to the previous cumulative $315,000 of seed funding it raised in July 2008 and January 2009, from Y Combinator and True Ventures, respectively. It also recently added one of the co-founders of Palantir Technologies as an advisor.

BackType’s free analytics dashboard, which is currently in private beta, aims to help brands and agencies understand the business impact of social media in order to make more intelligent marketing decisions. The company has already amassed 30 terabytes (one terabyte is roughly equivalent to the entire contents of a large library) of social data (Tweets, Facebook comments and likes, blog comments, etc.) and assists more than 100 companies with their social media analytics, from The New York Times and Edelman to startups like Bitly, HubSpot, Hunch and SlideShare.

Making sense of terabytes of social data in realtime is no easy feat. BackType uses a high tech stream processing system, akin to Hadoop but for real-time processing, which they claim goes beyond what Facebook and Twitter have developed for their analytics. You can read more about the big data processor here. BackType CEO Christopher Golda told me that, thanks to this backend tech, the company was able to build and release influence profiles for every active Twitter user in under 24 hours.

The company provided TechCrunch with statistics for the viral hashtag #LessAmbitiousMovies as well as a snapshot of the number of mentions “Tunisia” received on Twitter after the fall of Tunisian president Ben Ali.

Golda said that BackType will be using this new round of seed funding to grow the team and launch its new paid analytics product, which he said will debut later this year. In the meantime, you can find its paid Twitter-only product here or use its free product here.