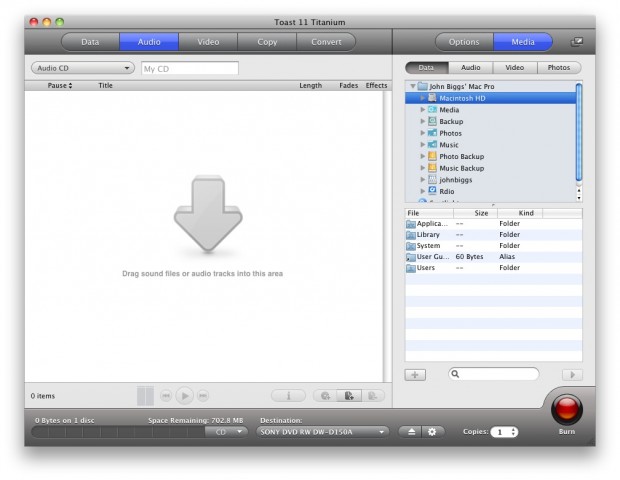 Roxio just announced the release of Toast 11 Titanium and Titanium Pro DVD, CD, and Blu-Ray disk authoring software for the Mac. If there’s anything constant about Toast is that it’s constantly changing. This new version is a considerably departure from the previous few versions and features a more streamlined interface as well as improved Blu-Ray authoring services.

The standard version is $99 and includes most everything you need to burn a few disks of an evening and a $19.99 plug-in allows for BR burning. The $149.99 Pro version includes the plug-in as well as:

· Adobe® PhotoShop® Elements 9 – the latest, full-featured version of the #1 selling consumer photo-editing software for the Mac. The application delivers powerful options that make it easy to create extraordinary photos, quickly share your memories in online albums and unique print creations, and automatically organize and help protect all your photos and video clips.

· FotoMagico™ 3 – turn pictures and video into high-quality slideshows with a few simple clicks, and present them in high definition with the latest version of FotoMagico. Innovative text, transition, and alignment tools ensure astonishing results.

I tried out the new version and even on my ratty old Superdrive I was able to burn a few good DVDs without creating frisbees, something I was unable to do with the previous few versions of late. If you’re running Toast 9 or even 10, it may be worth an upgrade if you’re seeing performance issues on your older drives.