Back in November we wrote about Memolane, a new startup that lets you import and visually browse through your tweets, Facebook updates, Flickr photos and the rest of your content littered across the web. Today, after months in an invite-only beta, the service has gone live to the public, and it’s unveiling a handful of key new features just in time for its launch.

For those that haven’t used it, Memolane is a sort of timeline of your online life. After authenticating with any of the 10+ supported third-party services, which include Facebook, TripIt, Foursquare, and more, Memolane will import your content and arrange it in a slick timeline view. It’s pretty cool — you don’t realize just how segmented your online life is until you’ve seen tweets from a recent trip positioned next to the corresponding Flickr photos and Foursquare checkins.

So what’s changed? CEO Eric Lagier says that when we first wrote about the service, it had a pretty simple privacy structure — you’d designate your Memolane as either private (accessible only by you and select friends) or public (anyone could see it). But the startup discovered that people often wanted parts of their service to private, and other parts public. So that’s what Memolane did: you can now designate certain services as being public (your YouTube videos, for example), and others as being private (like your Facebook updates).

Another important addition: content appearing in a Memolane will now include a link to ‘view source’, so you can see the photo or update on the site from which it originated. Lagier says that this is helpful if you ever want to delete a piece of content permanently. Other recent improvements include the addition of Instragram and MySpace support.

Lagier says the company isn’t sharing many numbers yet, other than to say that prior to going live it had served some 50 million ‘memos’ (pieces of content that have been imported into the service). Since launching this afternoon, they’ve doubled that. 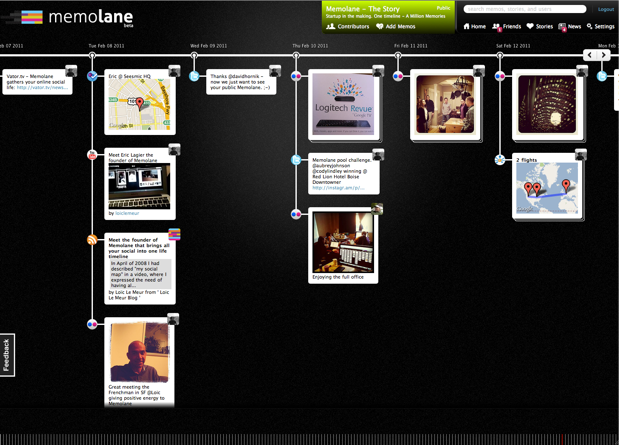