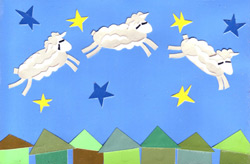 It would appear that our increased reliance on technology has destroyed our ability to have a good night’s sleep. So says the 2011 Sleep in America poll, which was conducted by the the National Sleep Foundation. Something tells me they would be the guys to go to for all your sleep data needs. The study shows that 95 percent of Americans use a communication device (computer, phone, etc.) in the hour before bedtime, which absolutely wrecks your body’s clock, as it were, thereby preventing you from having a decent night’s sleep.

The study’s primary conclusion is that Americans don’t get enough sleep overall, and that the sleep they do get is largely rubbish. Waking up several times throughout the night, waking up too early, snoring like a truck, etc.

As Ric Flair once asked, what’s causing all this? Blame technology. As mentioned, fully 95 percent of Americans use a communications device in the hour before going to bed. That’s a critical hour, too, since ideally you’d be winding down before going to bed. Texting your friends, trolling Facebook, reading Charlie Sheen tweets, etc. All of this mental stimulation essentially keeps your brain awake, and prevents the release of a certain hormone that tells your body, “Hey it’s time to go to bed. Get tired.”

Watching Netflix on your iPad may be handy, but it’s not necessarily healthy.

What should you do? If you can, make sure your bedroom is only for sleep. Don’t have an entertainment system in there, and don’t play Angry Birds while in bed. Only go to your bedroom to sleep. And in the hour before going to bed, try to wind down. Turn off the TV, turn down the lights, maybe at most do some light reading (these books would be a great start).

Failing that, you’ll have to put up with rubbish sleep, and not a lot of it.