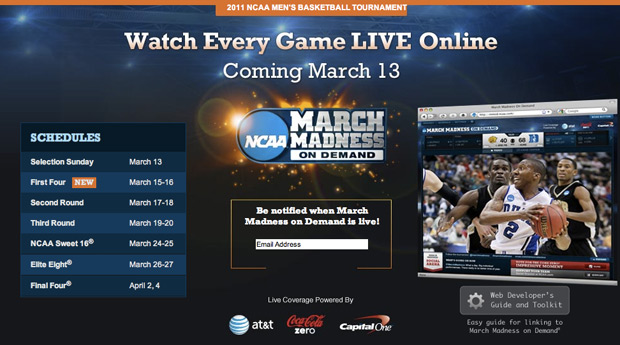 What month is it? March, yes. Thanks, iCal. That means it’s time for March Madness~! (Followed by April craziness, of course.) This year the NCAA, along with its television partners Turner Sports and CBS Sports, have noticeably improved the tournament’s new media presence. Every game, and there are 68 of them, will be live-streamed, and they’ll be viewable online and on all your iOS devices, including the shiny and new iPad 2.

The app is called March Madness on Demand, and it’ll be available starting on March 10. Streams will be of the highest quality, so there’s no reason to tune into one of those shady sports live-stream sites. They’ll work over both Wi-Fi and 3G.

And to think, just a few years ago if you wanted to follow March Madness online you’d have to be content with mere text play-by-play commentary.