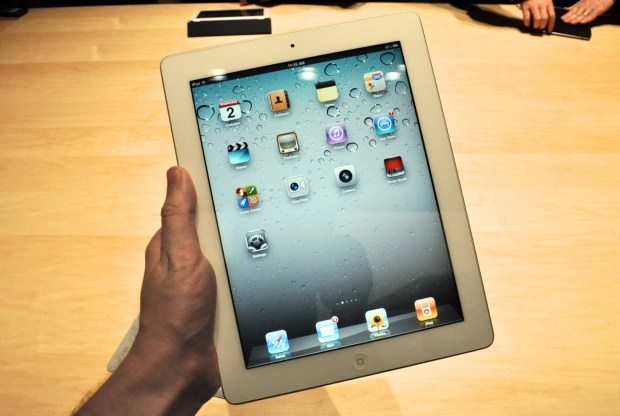 This morning’s Apple press event has come and gone, and as you likely have noticed, we covered just about every aspect of it. The iPad 2 itself, the new features and apps coming with iOS 4.3, the 100m and 15m iPhone and iPad sales numbers, even the new device’s funky magnetic case. That said, the announcement was conspicuous for its lack of truly major announcements. Rumors have been flying left and right about potential new features, but virtually none actually manifested.

Did our little online echo chamber make us expect too much, or did Apple, in the face of powerful alternative devices like the Xoom, deliver too little? Here are our opinions on the announcement and what’s yet to come.

Greg: It’s here! It’s here! It’s finally here! And it’s… about what we expected — you can find our full hands-on with video here. The rumor mill’s whispers on this one ranged from fairly obvious (cameras!) to fairly absurd (touch sensitive back!), which seems to have set a lot of people’s expectations unreachably high.

The iPad 2 isn’t a complete overhaul; it’s the result of polishing up the first generation. It’s insanely thin (almost shockingly so, in person), crazy light, and runs like butter. If you held off on buying the first-gen knowing this one was right around the corner, there’s no real harm in buying now; even if the rumors of #3 being months away pan out, that just means you’ll feel out of date in 6-9 months rather than 9-12. (Update: Added the last 1/3 of Greg’s input. WordPress ate it.)

John: We kind of expected this. As with the iPod Touch, the iPad is more a “device” than a “cellular device” and as such follows Apple’s standard upgrade procedure. It’s almost silly the way we’re able to read the Kremlinology of Apple upgrades these days, but that’s what you get for sticking to a working formula.

As for the rest of the tablets out there? Tough luck. While I love the Xoom and can still get behind the new Galaxy Tab, it would be hard to recommend either of those over the iPad 2 to the average user. Apple knows how to make tablets and everyone else is just learning.

Devin: The new industrial design is great, but that’s pretty much the only change that happened here. The new processor is mainly necessary for iMovie and processing video from the camera, the rest of the apps and interface probably won’t show much difference. And 4.3… well, there’s just not a lot to it. To be perfectly honest right now I’d say the best deal on the market is a refurbished original iPad, which you can get for only $349 right now. Until the Android devices start driving each other’s prices down and/or the iPad 3 hits at the end of the year, you’ve got a solid and now fairly cheap tablet to hold you over. As for that cover? It’s very clever, but sliding things along glass carries a great risk of sliding other things… like grains of sand or crumbs. I’ll be interested to see whether it’s as effective as they claim.

Nicholas: So, the iPad 2, eh? I guess it’s a solid device—Apple knows how to make a shiny piece of kit—but it’s hard to get too excited about it when you know the iPad 3 will be available in just a few months. That’s what the rumors suggest, at any rate. Not everyone is going to be happy with the iPad 2 (Real Madrid player Alfonso Arbeloa wants to know why there’s no USB or Flash support), but what are you going to do? Remember: no one’s forcing you to upgrade just yet. Besides, if you need features like that there’s plenty of options for you at this point. In short, I’m reasonably keen on the iPad 2, but I’m pretty sure I’m going to let this whole tablet craze pass me by. I will cling on to my giant desktop PC (and regular MacBook) till they disintegrate into dust.

Kyle: The iPad 2 is just an evolution. Other than a few features (dual-cameras, dual-core A5 chip, and mirrored HDMI), there isn’t much to cause one to line up — I’m waiting for a high-rez display. Apple will certainly sell a bajillion, but I think I’ll hold off for iPad 3 and see if it gets a lower price. One thing that’s nice, but still evolved, is the new thin form factor; it’s pretty amazing to fit everything in while keeping battery life and features intact.

Matt: The iPad is evolving away from what I personally want. The iPad 2 announcements reaffirmed that I’m an Android user. iOS is simply too constrained for my taste. It feels curated and one dimensional. That’s great for some users, but not me. Oh and that’s a sweet iPad pool cover, Apple.

We’ll have a full review of the iPad 2 and its new apps as soon as it becomes available. In the meantime, be sure to keep an eye on our iPad 2 tag for the latest developments!