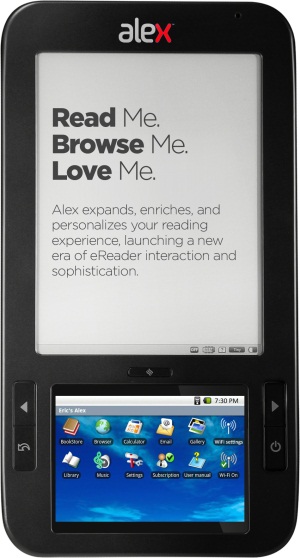 Barnes & Noble this morning announced that it has settled a lawsuit it was served by Spring Design back in November 2009 in connection to the latter’s Alex Reader (which, perhaps not so coincidentally, is in the process of being phased out).

The settlement agreement announced today resolves all claims brought by Spring Design, which will be dismissed with prejudice.

Alex is, or rather was, an e-reader device that combined two displays (an e-Ink display mainly for reading, and an LCD screen for browsing). One could view content on either of the screens and use a button to flip the display back and forth between the touch color screen and EPD screen.

In its complaint, Spring Design said it had shared the dual-display design of the device with Barnes & Noble when the companies held potential partnership talks back in 2009, prior to the launch of the nook. The company said Barnes & Noble later incorporated features of the Alex Reader into nook, breaching a nondisclosure agreement.

Spring Design on its website says it is discontinuing retail sales of the e-reader in order to focus its resources on developing “next generation eReader products and services” with ReadMate, the underlying technology used in the Alex Reader.