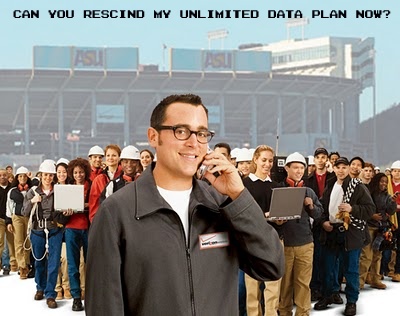 According to Verizon’s Chief Financial Officer Fran Shammo, speaking at a Morgan Stanley conference, Verizon’s current unlimited data plan is untenable and cannot remain in place forever, a bit of news that is disconcerting at worst and obvious at best.

According to a Cellular News report, Shammo said “Why did we do the unlimited $30 plan on the iPhone? Well, the reason we did that was we didn’t really want to put up a barrier to anybody who wanted to come over and experience the Verizon Wireless network. So we felt it was important to go out at the $30.”

Considering Verizon is moving towards a faster LTE network, the pricing will change over the next few months. Verizon customers could lose their unlimited plans as early as this summer, however, making for a class-action-lawsuit-worthy month of July.

The iPad 2 was just announced for a March 11th release on Verizon, but the plans for that device weren’t announced. Chances are unlimited data will not be carrying over to Verizon’s tablet selection.