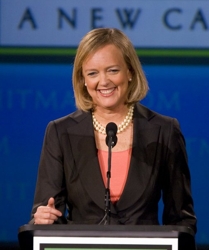 Zipcar, a membership-based car-sharing service that enables members to reserve a car via the Web, phone or an iPhone app, this morning announced the addition of former eBay CEO Meg Whitman to its board of directors. She will be replacing long-time Zipcar investor and board member Jim Gerson, who is giving up his seat.

Whitman led eBay from 1998 to 2008. After her tenure, she ran for Governor of California, won the primaries, but lost to Jerry Brown in the November 2 election despite spending roughly $160 million on her campaign.

(By the way, someone please tell her her website is down).

Former AOL CEO turned investor Steve Case is also on the Zipcar board, as is John Mahoney, vice chairman and CFO of Staples.

Zipcar says it now boasts more than 530,000 members and 8,500 vehicles in urban areas and college campuses throughout the United States, Canada and the United Kingdom.

In April 2010, Zipcar bought London-based car-sharing firm Streetcar for $50 million in its latest bid to expand across Europe.

We reported last June that Zipcar was pondering a $75 million IPO to pay off its debts, but at the end of last year the company raised $21 million in venture capital funding instead.