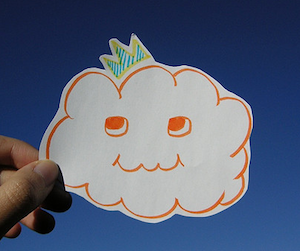 Yesterday, the tips started flowing in. “Google has deleted all my email.” “Check Twitter, massive Gmail failure.” “Gmail just melted down.” Users were freaking out. And that’s understandable. Many were apparently opening up Gmail to find that all of their emails had vanished. Had it happened to me, I would have been on Twitter swearing at the top of my digital lungs and promising to do something crazy — like switch to Hotmail. Of course, the reality of the situation wasn’t quite so dramatic.

While the initial reports had around .29 percent of Gmail users affected by the bug (about 600,000 users), those estimates were quickly revised to .08 percent (about 150,000 users). And today, those numbers were further revised to .02 percent. This means that only around 40,000 of Gmail’s 200 million (or so) users were affected.

Yes, despite all the ‘cloud this’ and ‘cloud that’ talk, when it comes down to it, Google still backs up everything on tape.

And thank god they do.

Just imagine if this bug had affected a significant percentage of users? All of those affected plus millions more would have likely never trusted Google with their data again. Worse, it may have slowed the flow of such data to the cloud across the entire industry. That may have made Microsoft smile, but we’d all have been worse off for it.

But again, luckily, that didn’t happen. Still, it’s fairly alarming that all of those insane data redundancy policies that Google has in place fell because of what seems to be a fairly standard “storage software update”.

Google notes that it’s going to take a little bit more time to get all of the data off the tapes and back into the cloud. But at least it will get there, instead of being gone forever.