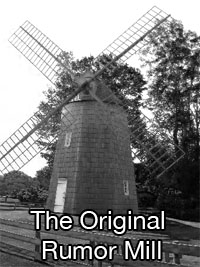 As anyone who’s been reading MobileCrunch for a while knows, I refer to the rumor mill in just about every other post. Usually it’s when I’m decrying the rumor mill as a cruel, cruel vixen, hell bent on crushing our spirits by setting our hopes on itty-bitty candy-powered iPhones, only to smack us in the face with silly things like logic, feasibility, and whats-actually-happening.

Sometimes, I worry that new readers won’t know what the rumor mill is. Will they think it’s a real place? Will they try to go to there? Fortunately, I can now just send them to the Oxford Friggin’ Dictionary, which added the term to its catalog today.

The Rumor Mill, according to the Oxford Dictionary:

used to refer to the process by which rumors and gossip are originated and circulated among a group of people:
the rumor mill says that he was reimbursed to the tune of $25 million

Sure. That works. We also would have accepted “used to refer to the ambiguous, impalpable source of sometimes-true-but-often-not blurps of information”, or this image.

Two other mobile-ish words added to the dictionary today: “Sexting“, and “Feature Phone“. They also added the term “fnarr fnarr“, which has absolutely nothing to do with cell phones but is absolutely glorious regardless. fnarr fnarr.