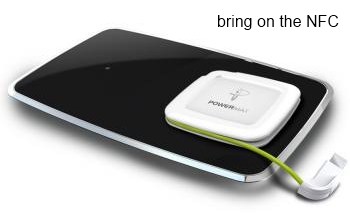 Powermat is looking at making an improvement to their tech that would combine the wireless charging capability with near-field communication, allowing for low-bandwidth communications while you charge. Sounds kind of weak at first, but really it’s a good match. They both emphasize that wires are, like, so 2010.

Yes, it’s not that you want to charge where you pay, or you want to buy things while you charge, but that Powermat wants to make its chips and the halo of services related to NFC and the like as robust as possible. Wires are the enemy to Powermat, and anything that makes wires less necessary is good news to them.

Right now Powermat stuff is still pretty bulky and expensive. But a smaller, flatter version with integrated NFC is on the way — something that could see inclusion in far more phones for far less money. I’m looking forward to it.